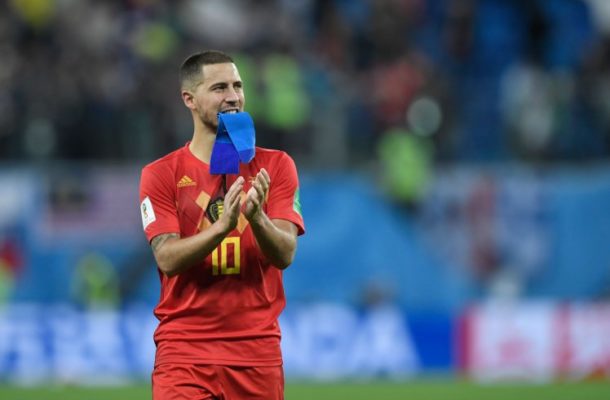 Belgium's forward Eden Hazard greets the fans after the Russia 2018 World Cup semi-final football match between France and Belgium at the Saint Petersburg Stadium in Saint Petersburg on July 10, 2018. France reached the World Cup final on Tuesday after a second-half header from Samuel Umtiti gave them a 1-0 win against Belgium. / AFP PHOTO / GABRIEL BOUYS / RESTRICTED TO EDITORIAL USE - NO MOBILE PUSH ALERTS/DOWNLOADS GABRIEL BOUYS/AFP/Getty Images

Eden Hazard has slammed France for their supposed negative tactics during their World Cup semi final win over Belgium.

The Chelsea winger was outstanding in the first half but his influence waned after the break as Didier Deschamps’ side retreated into their shells once Samuel Umtiti had headed the only goal of the game in the 50th minute.

Thereafter France relied on the speed of Kylian Mbappe on the break and were rarely threatened as a superb defensive effort, led by Raphael Varane and Hazard’s Chelsea teammate N’Golo Kante, kept the competition’s top scorers at bay.

‘I prefer to lose with this Belgium than win with that France,’ said Hazard afterwards.

Eden Hazard was unable to get the better of his Chelsea teammate N’Golo Kante (Picture: Getty)

Kevin de Bruyne had his quietest match of the tournament (Picture: AFP)


Those sentiments were echoed by goalkeeper Thibaut Courtois, who said: ‘France have played anti-football. I have not yet experienced that a striker plays so far from goal.

‘It’s their right to play like that… but it’s not nice to see. Not only the French tactics, but the referee… he didn’t call well at all.’

Manchester City star Kevin de Bruyne, meanwhile, was a little more diplomatic, perhaps mindful of the fact he will share a dressing room with several French internationals next season.

He said: ‘Have I been annoyed by France? No, I play at City. I play against teams that play so defensively 90% of the time.

‘That is football. What they do, they do well. Both teams have had opportunities. That one goal makes the difference.’