China PR close in on Finals 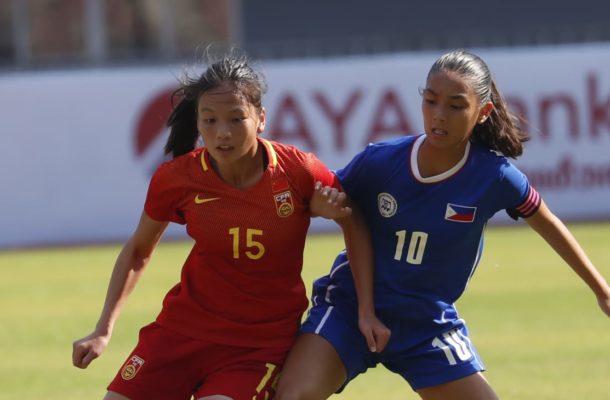 Mandalay: Zhang Hongyan’s four goals spurred China PR to a resounding 7-0 win over the Philippines in an AFC U-16 Women’s Championship 2019 Qualifiers Round 2 Group B tie at the Mandalar Thiri Stadium on Friday.


China PR started with purpose and it only took them 11 minutes to find the back of the net courtesy of an own goal by Philippines’ Mikaela Villacin.

The young Steel Roses, who cruised to a 5-0 win over Myanmar in their opener on Wednesday, added their second goal through Zou Mengyao in the 23rd minute.

China PR then turned on the style as Zhang scored three more goals in the 26th, 33rd and 44th minutes to give the East Asians a healthy 5-0 lead at half-time.


The Philippines, who lost 10-0 to Bangladesh on Wednesday, tried their best to contain their opponents but their efforts were in vain as Zhang added her fourth in the 77th minute while Fu Congcong completed the win a minute later.

Round 2 of the Qualifiers is divided into two groups of four teams each with the group winners and runners-up joining the top three teams from the 2017 edition - DPR Korea, Korea Republic and Japan - along with host Thailand, in the Finals in September.

Australia, Vietnam, Islamic Republic of Iran and host nation Laos are in Group A, which kicks off on Sunday, of the Qualifiers.
Result