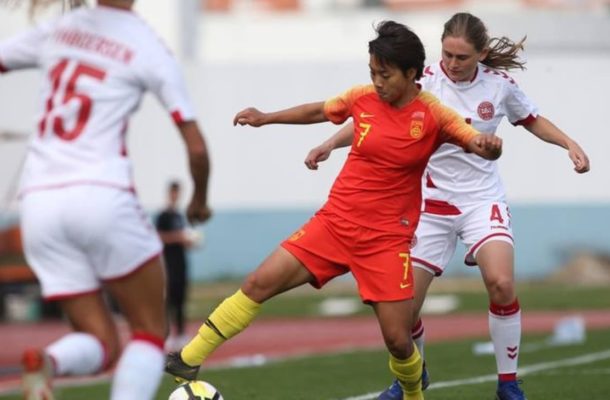 A penalty from 2018 UEFA Women's Player of the Year Pernille Harder was enough to seal all three points for Denmark, who finished second behind Norway in Group B, while the Steel Roses' two losses from two consigned them to last place.

With the likes of Wang Shuang and Zhang Rui back in Jiz Xiuquan's starting line-up, China PR made early inroads in the tie, creating a number of promising openings and hitting a post through Zhang in the 20th minute.

But despite the encouraging sings, China failed to find the back of the net, and they were made to pay when Danish captain Harder converted from the spot for her 54th international goal, and first for 2019, at the hour mark.

Jia made several substitutions as the Steel Roses searched for an equaliser - and Zhao Yujie came agonisingly close when she hit the woodwork in the dying stages - but it wasn't to be for the eight-time Asian champions, whose campaign will wrap up with a placement match on Wednesday.

Thailand slumped to a second successive Cyprus Women's Cup defeat, suffering a 4-1 loss against Italy on Matchday Three of the tournament on Monday.

The Chaba Kaew fell behind to a Barabra Bonansena goal in the 19th minute, but it was a red card to Duangnapa Sritala which really changed the complexion of the match, with the Italians hitting the scoresheet three more times after the veteran Thai defender's 45th minute sending off.

Daniela Sabatino and Aurora Galli added goals in the 53rd and 56th minutes to make it 3-0, before a heavy downpour delayed the match, and gave the Southeast Asians a temporary reprieve.

The 2018 AFC Women's Asian Cup semi-finalists responded positively after the restart, with Taneekarn Dangda scoring for the second straight match in the 73rd minute, but Sabatino struck again in injury time to secure a 4-1 win for Italy, who will face Australia in the FIFA Women's World Cup later this year.

Thailand's defeat leaves them with three points from three matches in the competition, meaning they are no longer in contention to lift the trophy, with only a minor placement match remaining on Thursday.

Uzbekistan will play off for third place at the Turkish Women's Cup after notching an 11-1 win over neighbours Turkmenistan on Sunday night.

The result means the Central Asians finished Group A in second place and will meet Northern Ireland, who achieved the same ranking in Group B, in Wednesday's third place decider.

Elsewhere, India will meet Kazakhstan in Tuesday's fifth-place play-off after suffering a 3-0 defeat against Romania, while Jordan and Turkmenistan will clash to decide the seventh and eighth places, after Al Nashmiyat were beaten 10-0 by France B in their final group match.

The tournament final will be an all-European affair, France B taking on Romania on Wednesday.