VIDEO: Akufo-Addo counts gov'ts achievements; urge Christians to be blessings to others in Christmas message 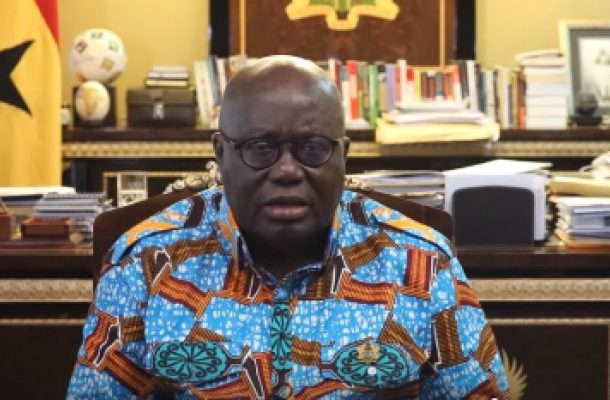 President Nana Addo Dankwa Akufo-Addo has charged Ghanaians, especially Christians, to help the needy and be a blessing to others as they celebrate Christmas today, Tuesday, 25 December 2018.In his pre-recorded Christmas message released by the Jubilee House on Monday to the nation, President Akufo-Addo said: “Let us celebrate the birth of Jesus Christ safely and responsibly and avoid doing that which will put our lives and the lives of our loved ones and others in harm’s way. Let us be a blessing on the lives of those in need and through our actions bring good cheer and glad tidings of great joy to all. I wish you all a Merry Christmas and a prosperous happy new year”.

He said he is looking forward to next year with a sense of hope and optimism because “our nation is certainly on the right path”.

“Next year promises to be a good one. I encourage you to join hands with my government in building a progressive and prosperous Ghana we all want,” he called on the people.

Nana Akufo-Addo admitted that though Ghana is not at where it ought to be, the signs of a better and brighter tomorrow are very clear, stating the achievements of his government in the last 23 months have been appreciable.

“Our achievements in office so far, even though modest, have been appreciable and visible for all to see,” he touted.

His government, he said, has laid a strong foundation for future prosperity, worked hard to create a “much stronger economy” which has been demonstrated by reduced inflation and fiscal deficits.

Again, he Nana Akufo-Addo said “thousands and thousands” of hitherto unemployment Ghanaians have been given jobs. These, he said included 100,000 graduants under the Nation Builders Corps (NABCO) programme.

The government has also restored teacher and nursing trainee allowances, and cushioned parents with the introduction of free SHS, which has also ensured access to education by some more schoolchildren.

He said the government has also abolished nuisance taxes and reduced electricity and water bills to cushion the people and promote businesses this year.

“And we have seen this year, a bumper harvest which has brought food prices down a lot as a result of my government strategic support for farmers under the programme, planting for food and jobs. Our country now found itself in a situation where it is now exporting food to its neighbours instead of importing food.

He said not a single grain of maize was imported into the country this year, adding “soon we will do the same for rice”.

Ghana, he said has become attractive destination for foreign direct investments, citing the decision by three global automobile companies to establish assembling plants in in the country from next year as a clear example.

These developments, Nana Akufo-Addo noted, can increases the fortunes of the country and its people.

The president urged Ghanaians to let the Christmas season reinforce the belief that “we can make it if we put our shoulders to the wheel no matter our circumstances”.

He has meanwhile wished Ghanaians a merry Christmas and a happy new year, and advised against acts that could put their lives and that of their love ones in danger this yuletide.

“I wish you all a merry Christmas and a prosperous happy new year,” he said.