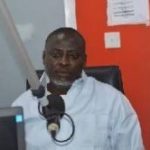 This follows a petition sent to the Bureau of National Investigations (BNI) by the Deputy General Secretary of the ruling National Democratic Congress (NDC), Koku Anyidoho who is calling on the state security to investigate the matter.

President Mahama has been petitioned to pardon a radio talk show host Salifu Maase, aka, Mugabe, and his two panelists Alistair Nelson, Godwin Ako Gunn, who were sentenced to four-month jail term for scandalizing the Supreme Court.

But Wadie contributing to a discussion on Rainbow Radio over the matter said, ''If President Mahama dares evokes his prerogative of mercy, what happened to the late Mills will happen to him. He should not dare pardon the trio, but if he thinks he is man and understands the law, he should go ahead and pardon them. If he releases them, by the next election, he will not be the president...I'm telling you that, if he dares, he will not be the president.''

His comments has attracted wide condemnation from a section of the public with some pressure groups and individuals petitioning the BNI to arrest him.

One Victor Quarshie, on Thursday, August 11, 2016 petitioned the BNI to do the honourable thing by commencing criminal investigations into the “serious allegations of threat of death and threat of causing harm against Wadie”.

A group calling itself, Concerned Teachers and Youth for Ghana, has also called on the BNI to arrest the politician.

Meanwhile, Michael Omari Wadie clarifying his alleged threat debunked suggestions that he wanted to assassinate the president as suggested.

According to him, his statement has been misconstrued.

''I did not threaten President Mahama, rather i said, if President Mahama pardons the trio, then he would have broken his oath of office, which he sworn to protect and preserve. As a matter of fact, the Presidential Oath he sworn says, I shall at all times protect the constitution of Ghana and suffer the penalty for it. And so if you have sworn this oath and abuse the power to undermine another arm of government, then you would have to suffer the penalty for it.''

A letter copied to Rainbow Radio 87.5FM from the CID says they want a copy of the audio recording in which the politician allegedly threatened the life of President Mahama as well as, his clarification on the same matter