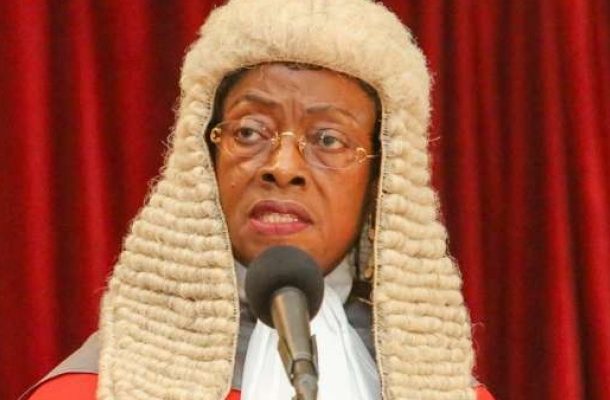 Chief Justice, Sophia Akuffo has remained resolute in her decision to open up the legal education in Ghana.

Madam Akuffo stated that Ghana needs good lawyers rather than lots of them.

Speaking on the topic: ‘Questing for Excellence’ at the 2019 University of Ghana Alumni Lectures, the Chief Justice asserted: “A good lawyer for each Ghanaian is what we deserve, not lots of lawyers”, adding: “I will stand here again and say we need quality lawyers, not mass-produced lawyers.”

In July this year, Justice Akuffo, while addressing the Bench, Bar and Faculty Conference at the Labadi Beach Hotel on the theme: ‘The Changing Landscape in the Law – the Judge, the Lawyer and the Academic’, said any attempt to allow the mass-production of lawyers without efficient control, checks and balances will be rejected irrespective of who is advocating for it.

“Those of you lawyers and those of you lecturers who are busy advocating free-scale, mass admissions into the professional law course, and mass-production of lawyers, be careful what you wish for”, she warned, adding: “So long as I have anything to do with it, it won’t happen”.

She said: “Just like you can’t mass-produce doctors and surgeons, Ghanaians must not have mass-produced lawyers imposed on them”.

The consequences of mass-produced lawyers, she argued were dire. “Those of us who have been too long on the General Legal Council; those of us who spent too long on the Disciplinary Committee, we have cause to worry because the kinds of misconduct are such that there is no way anybody envisaged these categories of misconduct when the Legal Profession Act was being enacted in the 1960s”.

Members of the National Association of Law Students last week presented a petition to President Nana Addo Dankwa Akufo-Addo at the Jubilee House.

This was after the association failed to present the petition on 7 October 2019 after the Ghana Police Service used water cannons and tear gas to disperse them as they approached the ceremonial entrance of the seat of Ghana’s Presidency after a peaceful march from the Ghana School of Law.

The protest by the law students in Ghana followed the massive failure recorded at the Ghana School of Law's 2019-2020 academic year entry examination, as only 128 students out of 1,820 passed.

The students marched in protest to call for reforms of the law education.