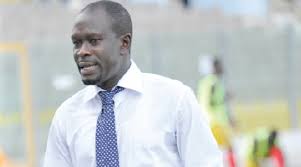 Asante Kotoko Coach CK Akunnor has showered praises on  his players after defeating Cameroon's Coton Sport de Garoua  3-2  in the first leg tie of the Confederation Cup on Sunday.

Two first-half goals from Emmanuel Gyamfi and Maxwell Baako earned Kotoko a convincing lead before Skipper Kamilou Daouda pulled one back for Coton Sport on the 39th minute.

Abdul Fatawu scores Kotoko’s third with their Cameroonian hosts clinching another  consolation goal to end it 3-2.

"We achieved our target from the game gaining an important three points away," he said after the game.

“Look, you made it happen.Yes, you did it, and I am very proud of you.

“I knew it wasn’t going to be easy,” Akonnor told Kotoko Express App in a later interview.

The return league encounter will be played at the Baba Yara Sports Stadium in Kumasi next weekend.

The victory puts the Porcupine Warriors in a good position to reach the knockout stage of the competition for the first time since 2008.

Winner of their playoff round will progress to the group stages of the Caf Confederations Cup.