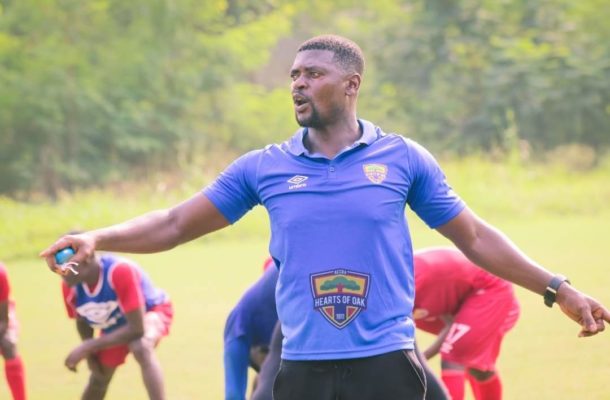 Hearts of Oak coach Samuel Boadu and his assistant Hamza Obeng have been dragged to the Ghana Football Association for the "unilateral" termination of contract.

The two, now in charge of Accra Hears of Oak, resigned from the Tarkwa-based side to join the Phobians.

But Medeama described their action as "arbitrary",  seeking for "substantial damages" from the two gaffers.

Boadu, a former Asokwa Deportivo coach, shocked the Mauve and Yellows with a resignation on February 25, 2021 but signed a permanent contract with Ghanaian giants Hearts of Oak seven days later.

Medeama have backed their case with legal justification for financial claims citing multiple adjudication cases from FIFA and the Court of Arbitration for Sports (CAS).

The Tarkwa-based side say the decision by coaches Samuel Boadu and Hamza Obeng are "premature, hasty, arbitrary, unacceptable and above all abuse of office as an employee" and did not find it expedient and prudent to warn or complain to the club before taken the decisions.

The club says the arbitral decisions have caused "irreparable harm" and has had a negative impact on the overall performance of the team.
Medeama also insist the "damage done physically and psychologically to the club" due to the sudden unplanned departure of the two coaches cannot be explained and are now seeking for a "residual value in damages".

Boadu's assistant Hamza Obeng also quit his role at the club on March 16 but joined his boss at Hearts of Oak eight days later.

Boadu spent three years at Medeama before being joined by his assistant Hamza Obeng - who spent two years at the club.

Medeama are set for a legal showdown with the two coaches after reporting the them  to the Player Status Committee for breach of contracts.