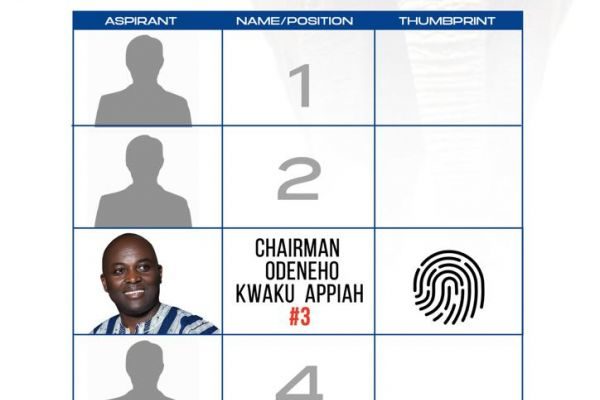 Balloting in politics has always been a big deal as religious and traditional people read several meanings and interpretations into it.

Many who believe in this myth are confident of the psychological advantage it carries for their candidates and vice versa.

Odeneho Kwaku Appiah, a chairman aspirant for the New Patriotic Party in the Ashanti Region is number three on the ballot for the 2022 Regional polls on May 27.

One of the main contenders and incumbent chairman, Bernard Antwi Boasiako picked number two, perhaps to clearly distinguish the space between them.

This came to light after a balloting exercise was conducted at the Regional Coordinating Council.

Whereas the perceived COKA contender (Wontumi) campaign message is about "Guy Guy n3 sika" literally meaning 'showing off and money', Odeneho Kwaku Appiah keeps preaching Hope, dignity, teamwork, Unity, Strengthening the structures of the party and above all working together to break the 8-year chain in the country's political history.

While the incumbent is seeking re-election with his Toa so message, COKA consistently calls for change. A change he believes will turn around the fortunes of the NPP in the Ashanti Region.