Compared: Man-for-man who has the better lineup – Man Utd or Man City? 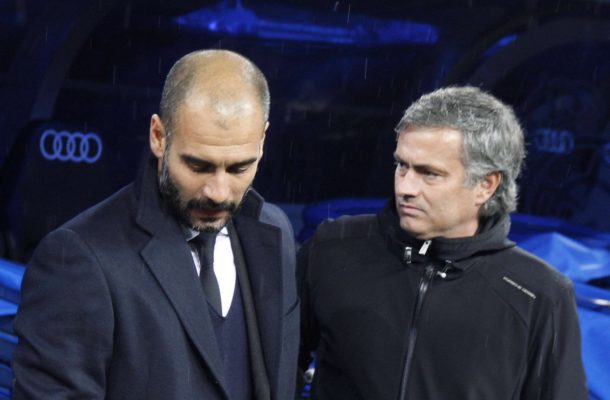 Who would get into the ultimate Manchester derby XI ahead of the city’s first grudge match of the Jose Mourinho and Pep Guardiola era?

To decide, Squawka ran each member of our predicted line-ups for Manchester United and Manchester City through the Squawka Comparison Matrix in order to find out which player came out best in their position.

It’s man for man, head-to-head, with nowhere to hide. Who will make the cut and win their individual battle to be included?


An almost impossible start. Comparing the two first-choice goalkeepers in Manchester on last season’s numbers due to the fact Bravo is yet to make his debut for City after signing from Barcelona this summer, it’s clear that the Chilean has everything Guardiola is looking for in his last-line of defence. Joe Hart was allowed to leave on loan this season due to lacking quality on the ball like his replacement but would be take De Gea’s spot at United?

Both goalkeepers are arguably better than the other for what their respective clubs need and want between the sticks. Mourinho isn’t so bothered with having a sweeper-keeper to play out form the back so much as knowing he has a shot-stopper to depend on, with excellent reflexes and a commanding presence in one-on-ones. De Gea gives him that, just like how Bravo fits the profile of what Guardiola needs.

There’s no way to separate them, even in the numbers. When it comes to successful punches, claims and percentage of duels won last season, De Gea is out in front, and this season the Spaniard has conceded just one goal. It’s a question of playing styles and what you want from your goalkeepers rather than quality, which means there can be only one result…

Far more straight-forward, this one. While Clichy may be a solid option at full-back for City, at 21 Luke Shaw is already regarded as one of the best players in the league in his position, and adds a whole new dimension to United’s attack when bombing on down the left wing, although his French rival remains an excellent defender.


Just like the men they both protect in goal, the debate over Bailly and Stones is also a question of what their teams need from them as much as it is their individual qualities.

The Ivorian and the Englishman both excel as ball-playing stoppers, stepping out from the back line to intercept dangers and send incisive passes forward between the lines to start new attacks from the back. Stones goes even further, rampaging forward in possession and attempting even riskier balls to slice teams open from deep, while Bailly is slightly more reserved and focused on guarding his own half rather than raiding the opposition’s territory.

Unfortunately, that means there’s no other option but to call for another draw.

In the battle of the converted centre-backs, Bailly’s defensive partner just about pips City’s Serbian protector. The Dutchman has an impeccable record when it comes to individual duels this season having won 100% of his tackles, aerial duels, take on attempts and committing zero fouls so far despite suffering two himself. Kolarov’s transformation has been impressive so far, especially his ability to compete in the air, but he just falls short against Blind.


After featuring in Guardiola’s first league game of the season, Sagna was ruled out through injury but the Frenchman could return against United after passing his fitness tests, especially after Pablo Zabaleta’s energy-draining travels during the international break. Therefore, we’ve looked at the right-backs of the Manchester derby using last season’s data, giving both players to post some numbers for comparison.

Valencia has been in excellent form so far this season, and will have to contend with his own fitness issues in the derby after clocking up the air miles crossing the Atlantic to play for Ecuador, however Sagna – like Clichy – is often overlooked for his qualities playing at full-back. Strong in the air and good going forward, when he’s fit it’s hard to look past the former Arsenal right-back.


A contentious one. The Brazilian has been one of City’s best players even before Guardiola’s arrival while Fellaini looked to be on his way out of Old Trafford prior to being entrusted with anchoring United’s midfield by Mourinho.

On their respective records this season, the Belgian has to get the nod. He looks like a player reborn in a deeper role, protecting United’s back four, completing more passes than Fernandinho and generally being the enforcer fans always expected him to be.

Yes, United’s record-breaking summer signing has been exciting presence in midfield but up against City’s Spanish catalyst he hasn’t quite provided the end product yet to justify being picked ahead of one of the most creative and consistent performers in the Premier League over the past few years. Of course, Pogba’s first Manchester derby will be the perfect opportunity for the Frenchman to ram this judgement down our throats with a match-winning performance from deep.

Whisper it but United’s captain is having a good season. Regardless of the valid criticisms about his style of play he has been involved in goals in all three of his team’s game so far, scoring against Bournemouth, setting up Zlatan Ibrahimovic in the win over Southampton and teeing up Marcus Rashford his winner away to Hull City. De Bruyne so far hasn’t looked quite as comfortable in his new role as Silva and therefore Rooney gets the nod over City’s Belgian playmaker.


United’s golden boy from last season up against the Premier League’s player of the month for August – the win has to go to Sterling. He has scored two goals and created an assist in his three appearances in the league for City so far, completing 11 take ons and drawing 10 fouls.

Martial, by contrast, has looked subdued of late. Besides two assists against Bournemouth, he has struggled to make an impact, completing just two take ons and suffering two fouls in three games.

With Sergio Aguero suspended, City will be needing more firepower in their forward line and Nolito could be just the player to provide after sticking two goals past Stoke City off the bench in his team’s 4-1 away win at the Britannia. There has been some suggestions that the Spaniard could line up as a false nine but we’ve gone with him roaming inside from the flanks, and wherever he plays he looks to have more about him as a game-changer than Mata at present.


Both Ibrahimovic and Iheanacho offer their teams more than just goals when playing up front. Although separated by an age gap of 15 years, the 34 and 19-year-old forwards are very complete players with excellent hold-up play and an ability to bring others into the attack. However, even using the City teenager’s data from last season, United’s veteran target man just about wins out in this contest.

Ibrahimovic is currently the joint top-scorer in the Premier League with three goals, finding the net with his head and his feet, and still showing incredible athleticism to attempt some outrageous shots from all angles and distances.


Of our 11 toss-ups above, United’s players claimed victory over five positions, City in four and two ending in a draw – a result that perhaps makes sense given Mourinho’s preference to focus on the individual players at his disposal compared to Guardiola’s approach in which the system comes first.

The first Manchester derby of their reigns at Old Trafford and the Etihad Stadium, respectively, looks set to be perfectly poised for a showdown between the direct, reactive counter-attacking tactics the hosts are likely to employ and the visitor’s desire to press high up the field and dominate their rivals.

United currently boast the best defensive record in the Premier League while City are top scorers; Mourinho’s team having won more of their duels while Guardiola’s side have created more chances. It should be a fascinating encounter well worthy of kicking off the latest chapter in their long-standing personal rivalry.