"Confession: I am not ok!" Actor Uday Chopra tweets and deletes message about his failing battle with depression! 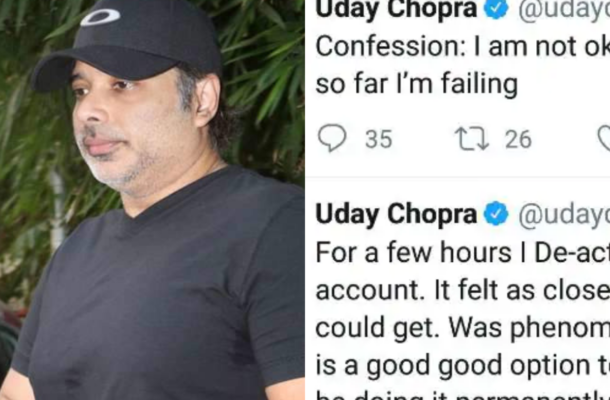 Depression really does not spare anyone. It does not matter what your societal status is, how popular or unpopular you are, how many people love or detest you, you can always be a victim. Although thankfully the taboo around the dreaded ‘D’ word seems to be slowly fading away, it is still a far cry from being considered as normal as battling a physical health condition.

Access to the internet and the blooming era of various platforms of social media may have played a crucial role in educating and empowering people to own their battle scars and talk about how they are feeling inside their head while having a smile plastered on their face.
The Dhoom fame actor Uday Chopra sent the Netizens in a tizzy when he posted two really cryptic tweets. In one of his first tweets, the actor mentioned that “he is not okay.”

Although the tweets may have been deleted now, the netizens were quick to take screen grabs of the same. Such posts from the actor hinted towards the fact that he might be suffering from depression.
His depressing tweets attracted a lot of concern from the Twitter users, who displayed unwavering warmth and support for the actor.

Hey please stay. We don't realise that but we do have people who love us,who care for us deeply and who would die for us. Keep that in mind. Depression does not end with the person , it just passes on to the other. Just let alone us. Think about your closed ones. They do love you— maietraie gupta (@thelostsoul08) March 22, 2019

Brother Stay Strong, Tommorow is another day, Just another day. Depression is NOT permanent.YOU ARE.— Saffron Surge (@Ved_Rajy) March 22, 2019

Surprisingly, this is not the first time that the Mohabbatein actor has taken to Twitter to talk about fighting mental health conditions. In June 2018, he had posted a series of Tweets which pointed towards his deeply-troubled life.

If you or a loved one is suffering from a mental illness get help.Remember you cannot will it away. You cannot just “think positive” or “shake it off” or “be strong”It’s the same as asking a person with a broken leg to just walk it offThere is no shame in it; help is available— Uday Chopra (@udaychopra) June 9, 2018

Depression, Anxiety, Social withdrawal, behavioral changes, over-indulgence in food, alcohol, drugs etc these are all signs. If they continue for a longer period of time then there could be an issue. Most importantly do not judge them for it, instead try and understand them.— Uday Chopra (@udaychopra) June 9, 2018

He had also talked about his lost passion for love, seemingly talking about his heartbreak over the alleged romance with actress Nargis Fakhri. He had written, “I wish I could love with the same intensity I used to love a few years ago. There was this girl and I felt alive just loving her. I’ve lost that now. I just want that passion back. Maybe that’s all I need.”

I wish I could love with the same intensity I used to love a few years ago. There was this girl and I felt alive just loving her. I’ve lost that now. I just want that passion back. Maybe that’s all I need.— Uday Chopra (@udaychopra) August 12, 2018

On the work front, Uday was last seen in Dhoom 3 in the year 2013, where he played the character of Ali Akbar.

In the last few years, many Bollywood celebrities have been quite brave and open about their vulnerable yet very private battles with depression. From Deepika Padukone to Shaheen Bhatt, the celebs do not shy away from talking about their mental health conditions anymore. We sincerely hope that the actor fights his demons bravely and comes out victorious.