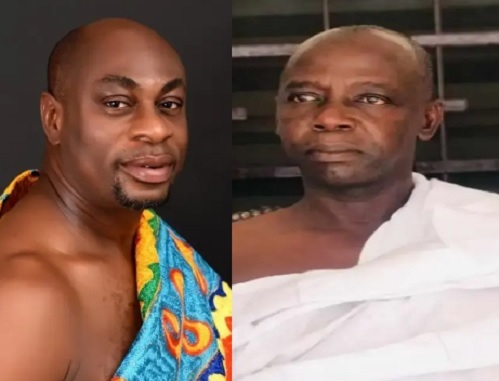 The Judiciary Committee of the Eastern Regional House of Chiefs has unanimously ordered the self-acclaimed chief of Kwahu-Nkwatia, Samuel Boama Danso with the stool name Nana Boama Ayiripe II to stop carrying himself as the chief of the town.

This follows a final judgment and ruling given by the Judiciary Committee on the protracted chieftaincy dispute that rendered the Kwahu-Nkwatia Stool vacant for three years after the death of Nana Atuobi Yiadom IV in 2016, who reigned for 60 years.

The Judiciary Committee chaired by the President of the Regional House of Chiefs and Paramount Chief of Lower Manya Krobo Traditional Council, Nene Sakite II, delivered the judgment before the applicants and the Respondents said: Considering the whole evidence, therefore, Nananom unanimously hold the position that this Appeal succeeds in part.

Secondly, by the custom and tradition or the Kwahu Traditional Area, the purported selection or election and installation of the 6th Respondent is declared null and void and of no effect.

Thirdly, by the custom and tradition of the Kwahu Traditional Area, the nomination, selection, or election of the 11th Appellant was proper and by custom.

Fourthly, the 6th Respondent is hereby restrained from holding himself out as Chief of Nkwaia and or performing any function as a Chief of Nkwatia.

The judgment Ordered that all the Respondents, either by themselves, agents assigns, privies, personal representatives, workmen, or servants are restrained from holding the 6h Respondent out as Chief of Kwahu Nkwatia.

Also, the respondents, their agents, cohorts, workmen, and assigns are Ordered to vacate the Nkwatia Chief's Palace and return all Stool, regalia in their custody, possession, and control.

And finally, a cost of Twenty Thousand Ghana Cedis (GHC20,000.00) was awarded to the Appellants.

Samuel Boama Danso and Nana Yaw Asante were chosen as the royals to be present to the king markers to choose one and installed him as the next chief of the area.

But in the voting process by the five king markers to choose one person, three voted in favor of Nana Yaw Asante, and two also voted for Samuel Boama.

Instead of choosing, Nana Yaw Asante who was nominated after the voting process, the Krontihene of Nkwatia – Nana Osei Tutu Ababio, and some stool elders in October 2020 allegedly conspired and in a smart move installed Boama as the chief under tight security at the blind side of the main nominee.

However, the late Queen mother of the town, Nana Agyeiwaa Kodie II, and some nine members who weren't happy with the illegal installation filed a petition against Mr. Samuel Boama at the Regional House of chiefs to halt the process.

The petition was initially dismissed by the Judicial Committee of Kwahu Traditional Council on October 16, 2020, before the petitioners appealed at the Regional House of Chiefs.

However, according to the Regional House of Chiefs, the installation was illegal since it failed to go through due diligence.

They subsequently applied for an interlocutory injunction on November 20, 2020, against the respondent from carrying himself as chief of Nkwatia, and that was granted in a ruling delivered on March 24, 2021, by the Judicial Committee.

He is currently the Group Chief Internal Auditor of Kasapreko Group of Companies.

Mr. Sefa Samuel 6 months ago
We thank God Almighty, now Nkwatia - Kwahu we have our own chief