Voting at the Zion Jhs pollen centre B in the Gomoa East constituency was halted  for close to 20 minutes as pollen agents of the New Patriotic Party have raised issues concerning the seal on the ballot boxes.

According to the NPP the there was one particular  seal added to three of the EC's and hence suspected a foul play. 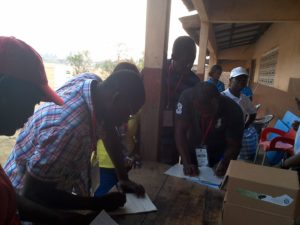 Speaking to ghanaguardian.com, the pollen agents of the NPP Mr Oman Ernest, said it was unfathomable to have and electoral box with seal of the ruling party before voting begins which, on the normal circumstances, should not have been the case.

"We raised an objection because there is this particular ballot box when brough had and NDC seal in addition to the three of the EC", the said.

"It cannot be accepted in this manner because we don't know  what might happen later.And even as we speak they 'v refused to give us the serial no. of the NDC seal."

"So we have called our regional office and we will deal with the issue if there should be any unhealthy situation."

The presiding officer has confirmed the issue but, according to him "everything has  been solved for voting to commence.

Political parties are allowed to have their respective seals on the ballot boxes after voting have been counted and to Mr Oman Ernest, the NPP will not tolerate any tactics by the EC and the NDC "to cheat in this year's election."