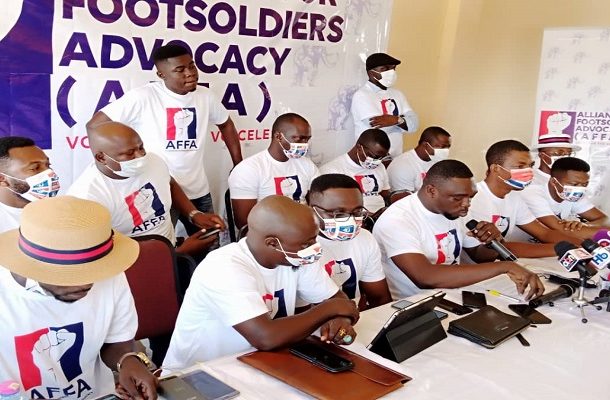 Spokesperson for the group, John Davis addressing a presser in Accra

The Alliance For Footsoldiers Advocacy (AFFA), an association made of NPP footsoldiers across the 275 constituencies in the country, is appealing to President Akufo-Addo to consider them with appointments in his second term.

According to the group, the time has come for the NPP to empower the grassroots to head some areas in this administration.

The group also pleaded with the President to appoint persons who do not only have the qualifications but also have the grassroots at heart since their efforts have contributed immensely to the growth of the party over the years.

Addressing a press conference in Accra, spokesperson for the group, Mr John Davis, popularly known as Opeimu Woyome, vowed they will leade a crusade for the wellbeing of footsoldiers in Ghana.

"AFFA is an oasis of hope for the voiceless; we are here to champion the welfare of footsoldiers to help break the 8-year jinx of the two leading political parties in Ghana".

John Davis lamented how footsoldiers have been neglected over the years when in the actual sense, they are the ones that do all the "grounds work" for the party's successes.

"It is rather unfortunate that the footsoldiers who do all the grounds work; paste posters, mount banners; embark on outreach and door-to-door campaigns, fill rally grounds, join demonstrations, defend the party on all media platforms are often times sidelined when appointments are being made." He said.

He added that the era where the grassroots were used as "election machines" and abandoned afterwards, is past.

"It's high time the voices of footsoldiers are heard and well-considered in the decision making in governance." He stated.

John Davis could not fathom why the party only remembers footsoldiers during electioneering campaigns and turn to forget them once elections are over.

"That attitude must stop now." He averred.

He said the parliamentary results of the December 7 elections must be a wake-up call for the party, adding that they cannot afford to lose power in 2024.

The group, therefore, called on the President to consider appointing some current and former party executives who have demonstrated immeasurable commitment, sacrifices and support to the NPP.

The group, however, tasked the government appointees to support the grassroots by providing them with job opportunities, financial assistance in their businesses, sponsor them to acquire skills or learn a trade as well as provide scholarships them to strive in their education.