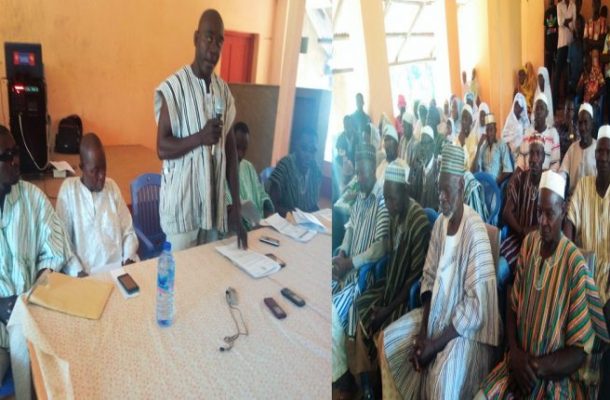 There is a fresh controversy in Bawku, one that has also aroused the radars of security agencies in that war-recovering part of the Upper East region, over strong allegations that the Municipal Chief Executive (MCE) has diverted some school projects to her “areas of interest”.

Hajia Hawa Ninchema is said to have switched three classroom-block projects, which were originally meant for some isolated villages where underprivileged children travel miles on foot to school, to three already-endowed suburbs at the core of the municipality.

Hundreds of angry-looking residents who say they are chiefs, queen mothers, assembly members, elders, opinion leaders and youth drawn from six communities within the Bawku Traditional Area, otherwise known as the Kusaug Kingdom, gathered Monday at a news conference to pour out their displeasure against “clear signs of bias and discrimination” said to have been perpetrated by the first-ever female MCE of that once-great commercial hub. The six communities include Nyorugu, Manga, Kpalwega, Gumbo, Mognori and Baribari.


“We wish to call on all NPP party leadership, the President of the Republic of Ghana, His Excellency Nana Addo Dankwa Akufo-Addo, the Minister of Local Government and Rural Development and the Bawku Inter-Ethnic Peace Committee to call the MCE, Honourable Hajia Hawa Ninchema, to continue the maintenance of peace which was better managed by her predecessors,” fumed Agangi IK Azumah, Chairman of the Baribari Youth Association, at a public gathering closely monitored by a serious number of uniformed security personnel and plain-clothed intelligence agents.

“The media, ladies and gentlemen, is it not the case that women leaders are admired by all because of their sense of humility, love and care for the vulnerable in society? We expect Honourable Hajia to think of the village child who cannot compete favourably with the children in the township in terms of infrastructure before taking that hard decision,” he spoke with punch as the angry crowd listened inside the Bawku Traditional Council building not too far away for the embattled MCE to hear from her office what was being said about her at the conference.

Why the MCE diverted the Projects

The reason behind the diversion, as the MCE is said to have mentioned when the conveners of the news conference confronted her three months ago, is that Manga, Mognori and Baribari do not need any new infrastructure because school enrollment figures in those communities have been abysmally low.

They also made available copies of a letter written by the MCE to the Minister of Education last month, informing the minister of the assembly’s intention to “relocate” the projects on grounds of “low enrolment”.

“We wish to state emphatically clear that we will resist any form of bias, discrimination, oppression and intimidation by Honourable Hajia Hawa Ninchema as she openly made remarks that she will never speak on the issues through the media and pretends not to have received our petition but remains fixed to ensuring that the diversion goes in her favour,” affirmed Mr. Azumah.


Pushed by newshounds at the conference as to what their next line of action would be if the MCE remained heedless despite the groundswell of pressure to retract her decision, the petitioners did not hesitate to say they would initiate a court injunction process to halt the execution of the diverted projects.

“In this 21st century, you cannot rob the people of what belongs to them. The initial allocation was based on needs assessment and it must be made to stand as such. We shall use all legal and proper channels within a week to ensure that what belongs to our communities remains in our communities if the MCE refuses to rescind her decision,” said Mumuni Fuseini Azonko, one of the speakers at the conference.

The MCE, who took office in the middle of this year after an insoluble wave of controversies had crushed the dreams of initial nominees for the coveted office she now occupies, also stands strongly accused of ordering a needless demolition of a classroom block at the Mustaphiat Primary and Junior High School to pave way for one of the “unduly diverted” projects.


“In the first place, the structure was still very strong. So, if there was a need for more classrooms, we would only need to maintain the existing one. I am an Assembly member and I know the processes we follow to maintain existing infrastructure. That school is called Mustaphiat JHS. There is another school called Seeadiya JHS around the same vicinity just around 400 metres away. There is also Winnamzua Cluster of Schools, with four different schools— primary and junior
high schools clustered at one particular spot opposite the Bawku Presbyterian Hospital, which is also just about 300 metres away from Mustaphiat Primary school, the one that has been pulled down.

“Just beside that school is Bawku Presbyterian Primary and Junior High School. And just about 600 metres away is Gbeewa Primary School and JHS. Beside that school, too, is Seeadiya and Sabo-Zongo JHS. All these schools are just within one electoral area, unlike Manga where the infrastructure was supposed to go and she has denied them. The whole of that zone, from Gingande up to Manga, it’s only Kpalwega Primary and Junior High School that is there. The Manga Primary and JHS is the only second school that is in that zone and which is about 3 miles away. There was no need diverting a project to Mustaphiat JHS let alone to pull down an existing strong structure there. That is a complete waste of the taxpayer’s money,” raged the Assemblyman for Kpalwega Electoral Area, Ninchema Mumuni Adakudugu.

When Starr News contacted the MCE Thursday via whatsapp after a number of telephone calls placed to her had gone unanswered through the week, she replied through the same medium: “Silence is the fence around wisdom. If your foot slips, you can always regain your balance. But if your tongue slips you can never recall the words. Anger won’t make your problems easier. Tears won’t bring back what is gone. But a smile, and gratitude will make you stronger. So whatever life gives you even if it hurts, just be strong and act the way you always do. Because strong walls shake but never collapse. Have a blessed morning.”