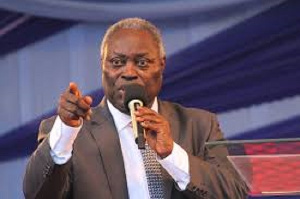 Pastor Kumuyi, the General Superintendent of the Deeper Life Bible Church held a crusade last night despite a ban on large gathering by the Lagos State government due to COVID-19.

The crusade titled ‘Power Night’ was held at a 30,000 capacity hall in Gbagada area of Lagos State.

Pastor Kumuyi who ministered on the night prayed for a total recovery for the world.

A doctor was allowed to educate people on how to take precautions against COVID-19 which now has 12 confirmed cases in Lagos.

One of the recommendations of the doctor is that people should practice social distancing.

This comes barely 24 hours after the Redeemed Christian Church of God, RCCG, announced an alteration in its mode of service following the ban on large gathering by the governments of Lagos State and Ogun State.