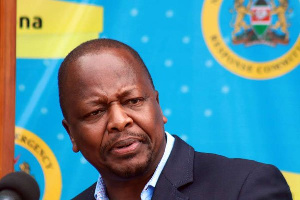 Kenya has hit another record high in terms of the number of coronavirus cases recorded daily, reporting 47 more positive test results on Wednesday.

The Health ministry said 32 of the new cases were recorded in Mombasa, 11 in Nairobi, two in Busia in western Kenya, central Kiambu County one and coastal Kwale County one.

He said the two people aged 68 and 76 died at their homes in Mombasa, raising more concerns cases that go unnoticed as people stay at home.

"One patient in Kenyatta National Hospital came to Kenya from Tanzania, through Loitokitok, using matatus. This shows us the danger we are in and further tells why the measures in the transport system have been put in place," he said.

The CS also reported that eight more people had been discharged, raising the country's total number of recoveries to 190.

The government announced tougher measures to contain the spread of the virus, with Eastleigh estate in Nairobi and Old Town in Mombasa emerging as hotspots.

As such, CS Kagwe announced the cessation of movement into and out of the two areas and said markets, restaurants and eateries would be shut effective May 6.

The orders will remain for 15 days in both areas.

Mr Kagwe noted that public transporters would not operate in these areas and but that activities within their borders would not be restricted amid mass testing to establish the extent of infection and identity contacts.

The minister noted that "these measures are not intended to punish but protect the people in those areas".

In Africa, the coronavirus had infected at least 50,502 people and killed over 1,921, according to case tracker Worldometer's count on May 5.