Cosmos Dawda scores to save Al-Faisaly from Humiliation 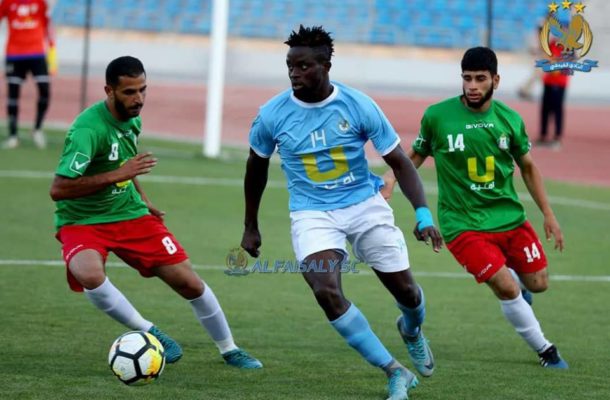 Dawda took on three Al Wehdat defenders before curling a shot with his left.

Former Accra Hearts Of Oak striker, Cosmos Dawda was on the score sheet when he inspired his team Al-Faisaly to come from two goals down to draw with sworn rivals Al-Wehdat in a farewell match for Legendary goalkeeper Lo'ai Al-Amaireh.

Dawda renewd the hopes of Al-faisly fans  when he twisted and turned three defenders before slotting the ball home for a consolation in the Friday night's  encounter.

He took on three defenders, dragged them out of position, turned and dribbled back into the space before curling a shot past the Al Wehdat goalkeeper.

Al-Wehdat , who are the 2017/18 champions of the Jordanian league, scored two quick goals in the 33rd and 35th to silence the home fans who had come to pay their last respect to a goalkeeper of a legendary status.

Alfaisl's aim of avoiding a  humiliating send off party for Amireh was achieved when defender  Bara snatch  the equaliser in the dying moments of one of the finest testimonial matches in living memory.

39-year-old Lo'ai Salem Atallah Al-Amaireh announced his retirement from the game after the 2017/18 season, ending 23 years of football career.

Dawda,24,signed a one-year renewable deal with the Jordanian and has since fit into the squad under coach Nebojsa Jovovic.

"I'm still focused and having a good preparation," Dawda said in an interview with ghanaguardian.com

"It is a new challenge and as well as development.

"I am hopeful for a great season."

The former Mighty Jets star ended his contract with the Phobians, when the latter decided to offload some of its workforce.

He was Hearts' highest scorer two season ago, when he first joined the former African Champions under Japanese American coach Kenichi Yatsuhashi.

He has  found the net twice since  joining the Jordanian giants in July.

Watch the highlites of the Friday's testimonial game played for goalkeeper Lo'ai Al-Amaireh.