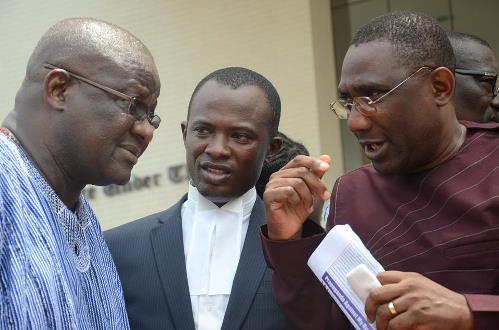 A Human Rights Court in Accra has dismissed the case in which the suspended Chairman of the opposition New Patriotic Party (NPP), Paul Afoko, went to court to challenge his suspension from the party.

Mr. Afoko had accused the NPP leadership, during his testimony, of not following due process before suspending him.

He was also challenging the capacity of one the members of the party’s disciplinary committee, Gifty Kusi, who was part of the committee that recommended his suspension.
Giving his ruling, Justice Anthony Yeboah, said the lawyers of Afoko failed to prove that the party erred in the procedures that were used in suspending him.

The Judge thus ruled that the party acted fairly and lawfully in the decision to suspend him.

“…So all the reliefs that were being sought by Afoko were dismissed. According to the judge, the case was not about whether the suspension was wrong or right, but about whether the procedures were right. And so the Judge said the decision of the party in suspending him still stands, Citi News’ Duke Opoku Mensah reported from the court.

The NPP’s National Executive Committee, suspended Paul Afoko, and the decision was adopted by the party’s National Council after its congress.

Mr. Afoko rejected the reasons for his suspension and subsequently sued the party in December 2015.

The suspended Chair had earlier described his suspension as unconstitutional and a breach of natural justice.

“The illegal National Executive Committee meeting adopted the illegal recommendations of the disciplinary committee following the rules and procedures laid down by the constitution by appealing against these illegalities,” he complained.

My opponents ‘plotted’ my suspension

Paul Afoko also alleged that the party’s action against him was masterminded by some members of the party who opposed his candidature before his election.

He said the members of National Council meeting that voted to suspend him are his avowed opponents who worked against his candidature ahead of the party’s congress to elect national officers.

“All those who voted at the Council meeting were against my candidature,” he argued.

An Accra High Court in June 2016, dismissed a suit by the second National Vice Chairman of the New Patriotic Party (NPP), Sammy Crabbe, who was also challenging his suspension from the party.

They were suspended for “misconduct” which included a disregard for party structures.