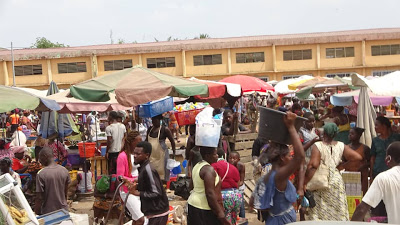 Market women and traders in Kasoa, in the Awutu Senya Municipality are a using the Assembly's task force and some officials of distorting money from them before allocating them space in the new designated markets.

In other to curb the spread of the CONVID 19, the Municipal Chief Executive of Awutu Senya East Micheal Mensah and his team have decided to relocate the market women at the old and new markets to Odupongkpehe Zion School, Datus School Park, Ofaakor D/A school park and Akwele Anglican School park in other to enhance social distance.

As the Municipality are doing their best, their Taskforce and Some officials from the Awutu Senya East Municipal Assembly has been extorting money from the market women before allocating them a space.

In an interview with the Media, the traders alleged that, they charges ranges from 10 to 50 Ghana cedis .

The traders lamented that the work of the taskforce had been reduced to self-aggrandisement at the expense of the people and they calling on the MCE call tje taskforce to order to restore sanity and order.

The frustrated market women further stated that, the purpose for relocating them to the park is not achieved they are crowded.

They fear the CONVID 19 might even spread since they many on the park and they are appealing to authorities to hasten in providing an alternative.