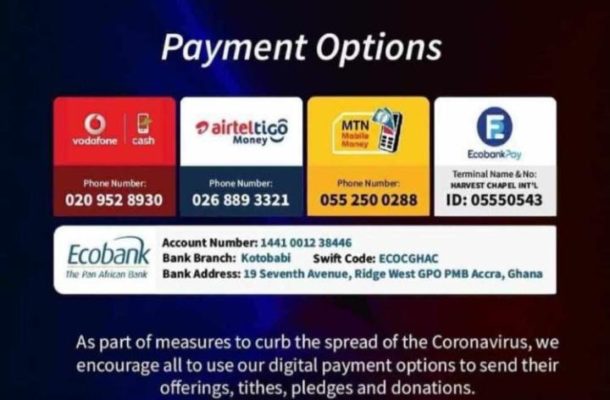 It is obvious we are not in normal times with the heightened threat of the deadly coronavirus literally leaving everyone in the country in a pensive mood.

Aside that, it is unfathomable to realize that the utmost religious Ghanaian has been barred from attending church or going to the mosque for Friday or Saturday or Sunday service or any other day at least for the next four weeks.

With the threat of the COVID-19 leaving a lot of casualty and death in its wake elsewhere in the world and even on the continent.

Many Ghanaians have been stricken with fear and panic and it was the ideal time for churches to have enjoyed a boom in attendance as everyone would have sought refuge in church to try and pray it off but due to the government's ban on public gathering, churches and mosque's across the country have been closed at least for the next four weeks.

Some church leaders have been angered by the situation ostensibly because of the financial toll it will have on them as they can not take their usual 'collection', offertory and tithe.

Some of them have resorted to online church services through digital platforms such as Facebooklive, periscope and other video streaming sites.

But the big question is how will they take the cash as was asked by Prophet Kumchacha on Wednesday 18th March 2020.

Most churches have now resorted to mobile money and other smart payment platforms to receive their offertory and tithes as the government's directive on no church service bites hard on churches at least for the next four weeks.