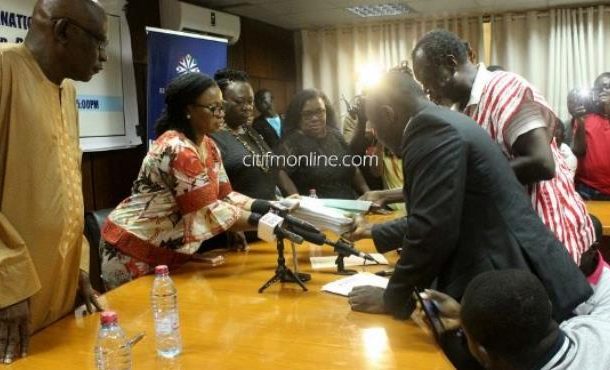 Political parties in the country have up to 5:00pm today [Friday, September 30, 2016] to submit nomination forms for their presidential and parliamentary candidates or forget the December 7 polls. GCPP Flagbearer [Right] In the case of the presidential candidates, the parties are supposed to submit the forms at the Electoral Commission's head office in Accra whereas those of parliamentary candidates are to do same at EC's district offices nationwide. The EC slated the last two days in September to receive the completed forms from prospective candidates after it opened nominations earlier in the month. 12 political parties have so far presented forms of their presidential nominees to the EC in a hope to get them on the ballot paper on December 7. Director of Electoral Services at the EC, Samuel Tettey, Filing fee brouhaha
The EC declined accepting the filing fees of GHc50, 000 and GHc10, 000 for presidential and parliamentary candidates respectively because of a law suit filed by the Progressive People's Party (PPP). Some of the parties had complained that the amount was too high. However, the EC today refused to give back to the PPP its filing fee after the party's Chairman, Nii Allotey Brew Hammond presented the forms of the party's flagbearer, Paa Kwesi Nduom.