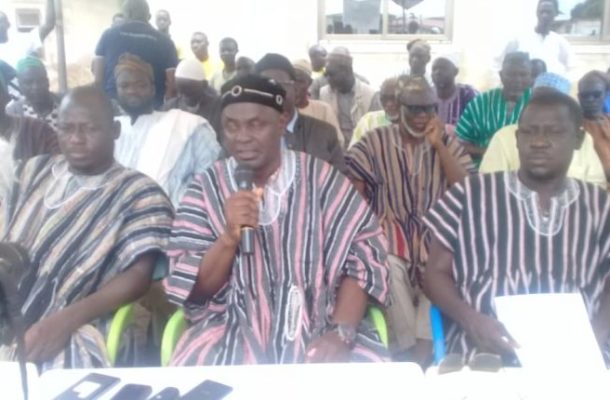 The Andani family has called for the immediate dissolution of the Committee mediating the Dagbon chieftaincy crisis as it accuses the Asantehene Otumfou Osei Tutu II, chairman of the committee, of conspiracy with government to aid the Abudus to forcibly occupy the Gbewaa Palace and perform funeral rite of late Naa Mahamadu Abdulai.

The family announced its withdrawal from the committee on Monday, June 25, at a press conference in Tamale, saying recent developments demonstrate the committee lacks principle, moral authority and integrity to adjudicate the crisis.

According to the family, it has uncovered the Asantehene’s involvement in an ongoing agenda by the NPP government to fulfil its political campaign to the Abudus by ensuring that the funeral rite of their late Abudu royal, who the Andanis do not recognize, be performed at the old Gbewaa palace.

According to the family, the government led conspiracy has detailed an advanced preparation towards the performance of the funeral rites of late Naa Mahamadu Abdulai and how certain individuals were to occupy some powerful skins in Dagbon.

Sharing the alleged conspiracy in the well-attended news briefing, Basharu Alhassan Dabali reading a prepared speech said, government has decided to rehabilitate the Royal Mausoleum and some parts of the old Gbewaa Palace destroyed in 2002.

Government also decided to force out the Andani family from the palace and to allow the Abudus a week access, in order to perform the funeral rites, subsequently, after which the current Regent of the Abudu family would be enskined as Mion Lana- one of the gate skin to the position of Yaa Naa.

The family also alleged that government planned to move the Kampakuyana Naa and current Regent of Dagbon to occupy the Savelugu skin and enskinned the Savelugu Naa as new Yaa Naa.

The family stated that these activities that are expected to be implemented soon are part of a bigger plot by the NPP government to fulfil an electoral bargain made to the NPP pro faction in the Dagon chieftaincy divide.

The family disclosed it outrage at the alleged involvement of the Asantehene and declared it will protest the implementation of the “agenda”.

The family maintained it will not allow the funeral of Naa Mahamadu to be performed at the old Gbewaa Palace and repeated calls for the arrest and jail the killers of Yaa Naa Yakubu Andani II and some members of the royal family.

“Indeed, the Otumfuo had earlier, in two separate decisions, maintained that the Funeral of Mahamadu Abdulai would not be performed at the Gbewaa Palace, but rather at the place where he died. This position of the Otumfuo was what led representatives of the Mahamadu Abdulai factions to announce a boycott of the mediation process. We therefore express our utter outrage at this sudden u-turn by the Otumfuo,” Basharu read.

“He cannot, and I repeat it, government cannot, the Asantehene cannot enskin Yaa Naa for Dagbon. Dagbon is not for sale. Those who are deceiving them that they are speaking for the Andani family are betrayals so they should not try to usurp the powers of the custodians of Dagbon. We have been very patient for a very long time and our patients should not be misconstrued as being weak”

“If the committee and government are to reward crime then they are indirectly telling us that crime pays, we should also follow the same tangent and we will definitely do that, so we expect the committee to respect the customs and traditions of Dagbon, Basharu Dabali said in a separate interview.

The family again called for the arrest of the current regent of the Abudu family, the Bolinlana, who the family described as “criminal whose rightful place is prison in any society governed by law, the Otumfuo wants to reward by elevating him to the gate skin Mion”.

“We would like to take a final opportunity to urge government and all those acting on its behalf to reflect very seriously over the possible ramifications of this latest program,” the family said, warning further that government “is pouring petrol on an already incendiary situation, and those who are pushing this program down the throat of Dagbon, would be held fully responsible for the consequences.”