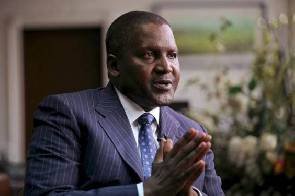 Nigerian billionaire Aliko Dangote has claimed that he hopes to buy Arsenal within "three to four years".

The 59-year-old, who is Africa's richest man, expressed an interest in sealing a takeover of the North London club last year.

Dangote, worth a reported $10.9billion, is believed to have been affected by the decrease in value of his country's currency as he lost around $4.4bn this year.

However, Dangote, whose business extends to the oil industry, still hopes to buy the Premier League outfit, of which he is a lifelong supporter.

When asked in an interview with Bloomberg Television when he hopes to buy the Gunners, Dangote said: "Maybe three to four years. The issue is that we have more challenging headwinds.

I need to get those out the way first and start having tailwinds. Then I'll focus on this.

American Stan Kroenke is the majority shareholder at Arsenal, owning 67.05 per cent of the club.