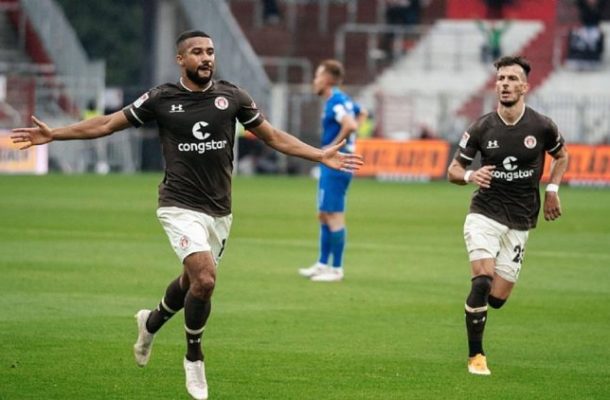 St.Pauli will be missing up to 10 players in the team ahead of the game against leaders Schalke 04 due to a COVID-19 outbreak.

St.Pauli star Daniel Kofi Kyereh is among the 10 players to have tested positive for the COVID-19.

The 26-year-old has been impressive this season for his outfit scoring 13 goals and providing 11 assists in all competitions.

St Pauli’s quest of securing promotion to the German top-flight has taken a nosedive after suffering a defeat and a draw against Darmstadt and Nuremberg respectively.

Despite the Corona outbreak with ten sick players, the Kiezkicker want to play at Schalke 04 on Saturday.

For St. Pauli's sports director Andreas Bornemann, the matter is clear: "We see no reason to apply to the DFL for a dismissal."

It is therefore clear that the Hamburg second division football team wants to play its penultimate game of the season at leaders FC Schalke 04 on Saturday despite the Corona outbreak in the team. The situation is not nice, but "we will not melt into self-pity," said the 50-year-old.

In a media round on Tuesday, Bornemann emphasized: "We are not looking for solutions not to have to play." Instead, it is about sending the best possible and competitive team onto the field in Gelsenkirchen .

Ten professionals are currently sick in fifth place. "Today there were no other cases," said Bornemann. Those responsible are confident that it will stay that way. The 50-year-old emphasized: "There are no guarantees." According to the current status, the club meets the requirement of having 15 players eligible to play, with one goalkeeper among nine licensed players.

Of the sick players, only captain Philipp Ziereis is known by name, who already missed the game against 1. FC Nürnberg last Friday (1-1). The club is keeping a low profile when it comes to the other victims. "We are 100 percent transparent to the authorities and the DFL," said Bornemann. The Kiezkicker try to ensure the greatest possible safety through adapted daily routines. The journey to the training takes place individually, we only meet outdoors, showered after the unit in our own home.

Despite all the adversities, the Hamburgers, who fell out of the promotion places after the 1:2 home defeat against Darmstadt and the draw against Nuremberg, do not want to bury their remaining hopes in the Bundesliga. According to Andreas Bornemann, the game at FC Schalke offers "a huge opportunity for the team and for each individual to send a big signal as a group".

Meanwhile, FC St. Pauli is counting on the fact that some of those affected can test themselves free until Saturday and then also meet the physical requirements for an assignment. "We will not send any player to a health risk," said Bornemann about the club's responsibility towards its players.

Otherwise, the squad could also be filled with players from the U23 and U19 teams. However, the regional league team has an extremely important game to stay in the league against HSC Hannover on Sunday .