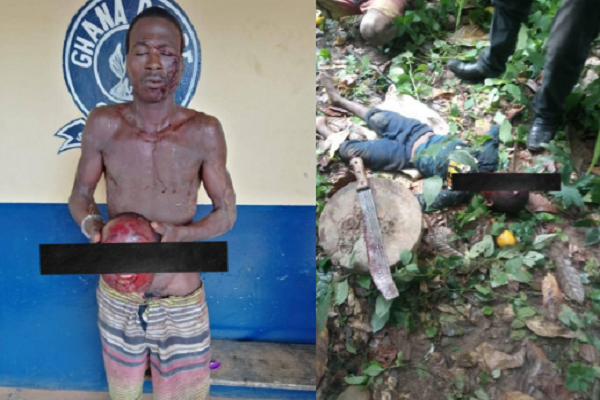 Kwabena Abraham admitted to killing the boy for ritual purposes

The love of money is the root of all evils, they say.

A 6-year-old-boy, Oscar Tanu has been beheaded in a gruesome ‘human sacrifice’ by his father at Nkrabea, a farming community in the Sefwi-Debiso District of the Western North region.

The heartless dad, named as Kwabena Abraham, admitted to killing the boy in a cocoa farm near Amoa Cocoa Shed. When police visited the crime scene, the headless body of Oscar was found lying in a pool of blood with a sharp machete and a mortar also covered with fresh blood.

The body and the head were separately inspected and found that the suspect used the cutlass to kill the boy after which he placed the deceased’s head on the wooden mortar and chopped it off entirely.

He confessed to the act and disclosed he was contracted to kill 3 boys for rituals, adding that the two boys are on the waiting list, and are in the custody of his two accomplices, Kwabena Dosu and Joe Naaba.

He led the police to Joe Naaba's residence near Kwabena Dosu's village where the boys namely Baba Moro, 10, and Awuni Mohammed also age 10, were rescued.

All the three suspects have since been arraigned before the District Magistrate Court in Debiso, and remanded into prison custody to reappear on October 13, 2019.

Police say they are still investigating the incident.