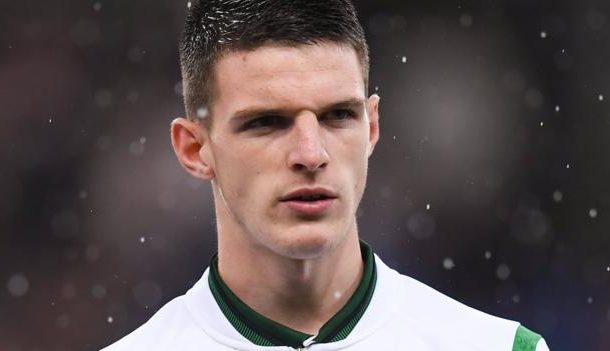 Declan Rice is still eligible to play for England, having played three friendlies for the Republic of Ireland

"He could be a future captain, he's that type of player," McCarthy told Sky Sports. "I had a really good meeting with him. It was myself, [assistant coach] Robbie Keane and his dad was there. It's up to him when he wants to decide. That's how I left it.
"It's not my decision as to whether he plays for the Republic of Ireland. It's only my job that if he wants to stay with us I could pick him."

Former Ipswich manager McCarthy has returned to the Republic job in place of Martin O'Neill and he has set Rice a deadline of the opening Euro 2020 qualifier against Gibraltar on 23 March to make a decision.
Rice declined to take part in the Republic's disappointing Uefa Nations League campaign while he considered the option to play for England but recent media reports have suggested he is now prepared to commit to playing for McCarthy's side.
"I'd love to build a team around him. We start in March. That's my deadline because I need to know by then," added McCarthy.
"He could be a future captain, he is that type of player. 100 caps would be a nice profile to have."
The Republic of Ireland will also face Switzerland, Denmark and Georgia in Group D of the Euro 2020 qualifiers and McCarthy has also revealed he is hoping to persuade Leeds United striker Patrick Bamford to reconsider his availability before the campaign begins.
"I have asked about him. I've asked about a lot of players like I normally do. My intention is to speak to Patrick. I think he does qualify. He is a terrific goalscorer," he added.
Bamford, 25, represented the Republic at under-18 level but also played for England at the same age group and later won two caps during England boss Gareth Southgate's tenure as the under-21s manager.Source: bbc.com