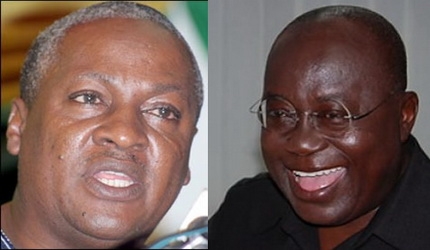 “Defeat is staring President John Mahama in the face,” Nana Akufo-Addo, flag bearer of Ghana’s biggest opposition party has said, adding that Mr. Mahama is resorting to personal attacks against him (Nana Akufo-Addo) because he is aware Ghanaians will reject him at the polls on 7 December.

Addressing supporters of the governing National Democratic Congress (NDC) in Bimbilla in the Northern Region on Tuesday August 23 as part of his campaign, Mr. Mahama said: “What we need in Ghana is an understanding president. The era of dictatorship is gone: we are not looking for a dictator, somebody who cannot stand criticism in his own party. If you criticise him, he will sack you…that is not the kind of leader we are looking for.”

“We are looking for a leader who can bring people together," he stressed in reference to Nana Akufo-Addo.

“...It is a very dangerous experiment. Ghana is not at the stage where we are experimenting leadership, and so you cannot come and beg that we should try you. We are not in the era of experiments and trials, we are in the era of what is sure. We have seen this government: one of the major successes of this government is peace and stability.

“We are looking for a leader who can unite Ghana and not a leader who will divide Ghana. If you cannot unite your own party, how do you unite a nation?" he questioned.

In his response, however, Nana Akufo-Addo said Mr Mahama and the NDC are hurling salvos at him

because they have realised that Ghanaians will reject them at the polls over their failed promises.

“The President and those who speak for him are today in a difficult situation in Ghana. They want to have a third term in office. But, instead of telling us about all the things they promised to do, so that we can decide whether or not to grant them the third term (i.e. being in office for 12 years), they can’t do that.

“… The President has made me his campaign. I am his campaign in Ghana today. … As defeat stares him [President Mahama] in the face, the language against me is going to go (a notch) higher and higher and higher, because it is clear to the overwhelming majority of Ghanaians that on the 7th of December, we are going to say to John Dramani Mahama: ‘Thank you and goodbye’.”