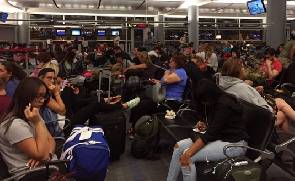 Delta Airlines says it expects more than 100 flight cancellations today [Tuesday] morning as it continues to recover its operations following a loss of power Monday, August 8, 2016.

Delta however says these numbers could grow overnight as it works to reset the operation and get crews, aircraft and other elements of the operation back in place.

A power outage at Atlanta, US on Monday morning, led to the grounding of global flights for over six hours.

Delta was compelled to cancel more than 870 flights on Monday while it delayed others.

It however begun limited flights at about 2 pm on Monday.

The CEO of Delta Airlines, Ed Bastian later in a video commentary apologized to affected customers.

He assured that employees are working with all hands on deck to get the issue rectified.

“The Delta team is working very hard… for those of you who have been inconvenienced and need to access any changes to your travel plans, we have instituted systemwide waivers and you can accesss those,” he said.
 
Mr. Bastian added, “I appreciate the hardwork by the Delta team to bring our systems back as soon as possible,”

Ghana flight to US delays by four hours

Meanwhile in Ghana, passengers onboard delta airlines to the US had to delay for about four hours.

But it appears that the Ghana office of Delta Airlines is yet to record any request for a refund by its customers.

General Manager for Delta Airlines GSA Ghana, Isaac Fabio Wilson explained that this may be possible since it wasn’t a total cancellation of flights.

A statement on Delta’s website however indicated that, “Following the power loss, some critical systems and network equipment didn’t switch over to Delta’s backup systems.”

It added, “Delta’s investigation into the causes is ongoing.”