Diaspora Progressive Movement calls for the withdrawal of $150.00 charge for COVID-19 test at KIA 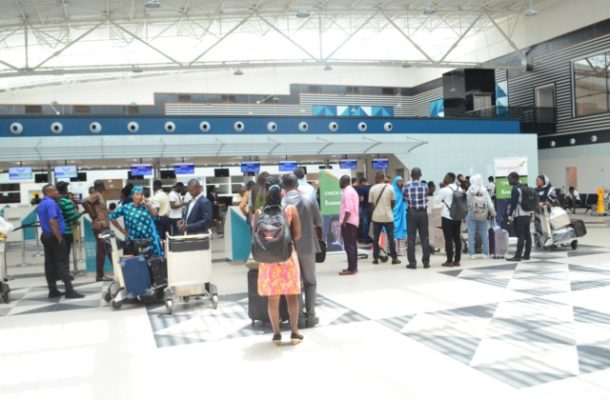 The Dispora Progressive Movement (DPM) has urged the Government to abolish the 150 dollars charge on mandatory covid-19 test at the Kotoko International Airport, describing it as an act of "stealing".

The US branch of the DPM is the latest group to criticise the Government for the move, raising eye brows over the decision.

The Government has said the mandatory testing, which is to be conducted for all passengers coming into the country, forms part of directives outlined by the Ministry of Aviation and Health to curb the spread of the novel coronavirus and ensure that the deadly disease is not imported into the country.

In a statement, urged the government to consider it's decision, saying it goes against what other country is charging.

"We are aware that some countries are charging as little as $20 or $30 for the same test and they have offered reasonable reasons why they are even charging," the statement read.

Read the full statement below

Good morning ladies and gentlemen of the press. We have gathered you here to add our voice to the numerous calls for the Government of Ghana to withdraw the $150 charge for the COVID-19 test at Kotoka International Airport (KIA)
We the members of this group think this is the time the government should show appreciation to Ghanaians abroad for our contributions to the growth of the Ghanaian economy by withdrawing the $150 virus fee.
We are aware that some countries are charging as little as $20 or $30 for the same test and they have offered reasonable reasons why they are even charging. In Ghana, they only reason given is that it is not the government who is charging but some private individuals. As we speak to you, we don’t know who those private individuals are.
We were informed that in a nation-wide telecast to the nation, the President said Ghanaians abroad are happy to be paying the $150 fee. We are aware this President has been misled on several issues and we are not surprised that he has been misled on this one too.
We are disappointed that this government in particular wants to steal from Ghanaians at any given opportunity. Examples are these $150 charge for COVID-19 test and GHC 0.30 charge for Ghanaians to check their names on the voters register. These are charges the government should be able to afford for its citizens.
This government has mandated that everyone coming to Ghana should have a clean health report indicating that the person tested negative to the virus 72 hours before their flight. We want the government to know that, that test is not free. So paying double for the same test, we think amounts to stealing. We are hoping that for once, the government will treat its citizens abroad fairly and with respect.
We don’t want to believe that the inability by the Electoral Commission to implement ROPAL affected the decision by the government. But ROPAL or no ROPAL, we should be given the same treatment as Ghanaians who, one way or the other change the destiny of the country.
We don’t want to politicize this but looking at the way this government is given free stuff and increasing allowances to some Ghanaians, we can say if the ROPAL had been implemented, we too, would have gotten this test for free. This is where we think, this government is not treating her citizens abroad fairly and with respect. Please Mr. President, withdraw the $150 virus test fee at KIA.
Thank you very much for coming.
Signed:
Dr. Lawrence Appiah
(President)
1 703 400 1621
Distribution: All media houses.