DKM client dies after learning his GHC600,000 will not be refunded 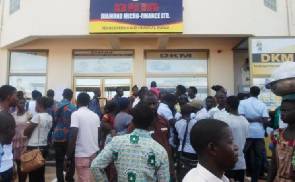 A customer of the defunct DKM Microfinance Company, identified as Kwasi Addae, owner of Micky Enterprise at Berekum in the Brong Ahafo Region reportedly died on Sunday night as a result of the shock of losing his GHC600, 000 investments in the company.

He was said to have died moments after learning that his name was not part of the list of people whose names had been verified and certified for part payment of their deposits.

The official liquidator of the defunct company started the payment of part of the amount deposited by the customers on Monday.

Confirming the incident, the spokesperson of the Concerned DKM Customers in the Brong Ahafo Region, Mr Maxwell Mahama told Graphic Online that the deceased, who was a known member of the group, was a businessman who dealt in wax prints at Berekum and operated the Micky Enterprise.

“The family will not tell you about the cause of the death of their family member but it is clear that he died over the DKM debacle”, he explained.

Checks by Graphic Online at Berekum also confirmed the death of the businessman.

A resident of the town who pleaded anonymity said Addae, who was popularly known as Braa Kwasi had been sick for some time now as a result of his heavy investment in DKM.

His name according to Mr Mahama was not found in both the first and second lists provided by the office of the official liquidator to receive part of the monies deposited with the DKM.

Meanwhile part payments to the customers continued on Tuesday in various places in the region.

When Graphic Online visited the GCB Bank premises as early as 4.30 am, all the chairs provided under the erected canopies were full with people standing.