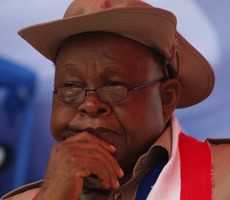 Speaker of Parliament, Prof Mike Oquaye has kicked against calls for the scrapping of the death penalty in Ghana’s statute books.

The death penalty has been in Ghana’s statute books since the application of the English common law in 1874, but in practice, no execution has been recorded since July 1993, when then-President Jerry John Rawlings ordered the execution of some 12 convicts via a firing squad.

Human Rights groups, like Amnesty International for years, have been pushing for the expulsion of the death penalty from the country’s statutes.

The call heaped on following the sentencing of three persons by a Tamale High Court to death by hanging in July for murder.

“It is rather unfortunate that Ghana, we are still handing down death penalties or death sentences to Ghanaians. I believe that this is something that we should put an end to,” the Country Director of Amnesty International, Ghana Robert Akoto Marfo told Starr News’ in July in a reaction to the Tamale High Court sentencing.

Prof Oquaye however, argued Tuesday in Parliament after the approval of President Akufo-Addo’s nominees to the Supreme Court, that death penalty is a fallback measure for the nation in punishing heinous and horrendous crimes thus, it must be maintained.

“It is [a] very interesting matter when people talk about the right of the criminal. Supposed a psychopath sets out to go and kill people in the mosque on Friday, people in the church on Sunday, mows everybody down, [and] at the end of it, he says, I have got the right under the law not to be executed. It is ridiculous. He has got the right not to be executed, but he has the right to go and kill thousands of worshipers. So, the state must reserve for itself [the death penalty]. It’s good that in Ghana we have not executed people for so long of the death penalty.

“But, I believe the State of Ghana must have it [death penalty] in its pocket reserved so that where necessary, the most heinous of crimes can still be subject to such executions. These are parameters that some of the Human Rights advocates don’t seriously exam and we must be very mindful of them in the future,” he stated.