Do you have common sense? - Angry man blasts Akufo-Addo over 100-year loan 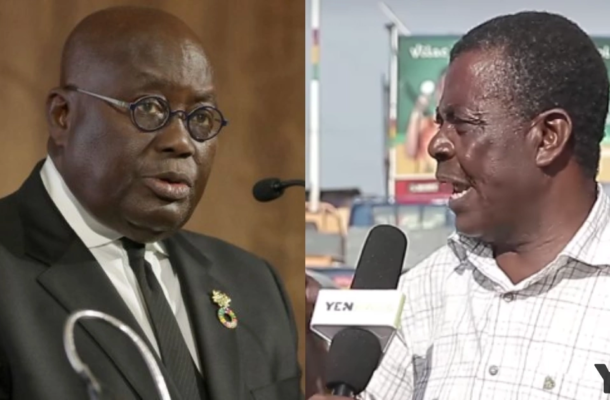 A Ghanaian man who is angry with the current performance of government has taken President Nana Akufo-Addo to the cleaners.

According to the elderly-looking man, Akufo-Addo is showing traits of Adolf Hitler because he just sets out to do whatever he likes.

The man who is not pleased with the general performance of Akufo-Addo has been particularly irked by the recent news that government was planning to borrow money which will be paid over a 100 year period.

It will be recalled that Akufo-Addo, while meeting China's President, Xi Jinping, expressed Ghana's willingness to float a $50 billion dollar bond that would take 100 years to be repaid.

While Ghana may not be the first country to implement such 100-year bonds, the man totally disagrees describing it as incorrect.

"It is not correct. It is not normal. The whole thing is like Akufo-Addo has now turned to Adolf Hitler. Whatever he wants, he wants to do. Ghana does not belong to him and his family. It belongs to all Ghanaians"

For him, Ghanaians were being charitable with Akufo-Addo by not criticising him enough over the matter.

"There are some people, I don't know whether it's a medicine...people fear to talk. If it's not good it's not good. Look at 100 years. Is the family coming to pay or is Ghanaians coming pay?"

He recollected some of the key promises Akufo-Addo and his vice president, Dr Mahammudu Bawmia, made on borrowing during campaign to buttress his point that Akufo-Addo was doing things as he liked.

He said: "I was here when Bawumia came. He said Ghana we have money here and Akufo-Addo himself came to campaign here that Ghana we are sitting on money and then we are suffering. Where is the money? Mahama took the money away?"

"So it's only Chinese who can develop here [Ghana]? Why not depend on the Ghanaians so the money will be here...are we having common sense?," he angrily asked.

Touching on the implementation of government's flagship Free SHS policy, the man sounded least enthused about it saying it was not actually free and could have been made better if government had taken its time.

"Who forced you to make Senior High School free? They put tax on so many things that indirect we are paying," he said.

This is the second time in about a month that President Akufo-Addo has been subjected to such a scathing verbal attack.

The founder and leader of the Glorious Wave Chapel International, Emmanuel Badu Kobi had described Akufo-Addo as a fool during a sermon in his church.

This followed proposals by the Ghana Revenue Authority to tax the business activities of churches.