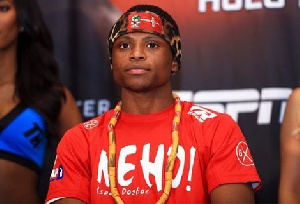 Lokko was instrumental in bringing up IBF lightweight champion, Richard Commey, before they parted company two years ago and expects Dogboe to take a cautious approach when he returns to the ring as it would be key to reviving his career.

Dogboe’s bright career suffered a sharp dip just eight months after winning the WBO title as he lost his second title defence to Navarrete at the Madison Square Garden last December before their rematch six months later ended in a 12th round technical knockout defeat to the Mexican.

Following the second successive loss, Paul Dogboe decided to step aside at trainer of the dethroned champion and asked his son to take time off the sport to concentrate on his education.

Lokko told the Graphic Sports that Dogboe’s career was ruined partly by the decision to go into an immediate rematch with Navarrete, particularly when their first bout proved difficult for the Ghanaian. However, he believes the boxer could work his way back to the top with hard work and tact.

“In coming back, Dogboe must strategise before making his subsequent ring outings after two consecutive defeats. This is because his next bout would prove crucial in getting his career back on track and his team must work harder to get him back since he is still young and strong,” he said.

Dogboe, who has suffered two defeats in 20 bouts, has reportedly relocated to California as he looks to relaunch his career under experienced American trainer, Freddy Roach.

It is, however, unclear in which division Dogboe would be competing upon his ring return, having earlier announced a decision to move up to featherweight class following struggles with making up the weight in the super bantamweight