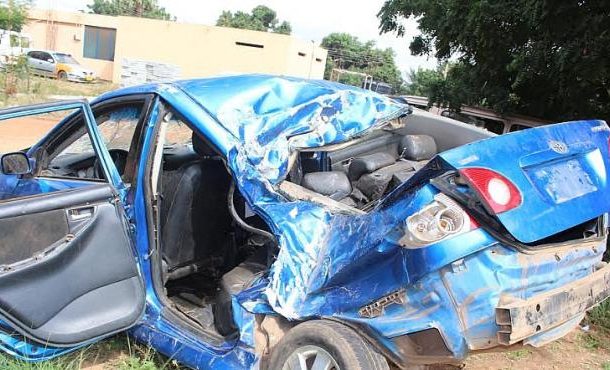 One person died while two others sustained severe injuries when a Toyota Corolla they were travelling on board veered off the Dome-Kwabenya Road and landed into a ditch.

Driver of the vehicle, according to eyewitnesses, was over speeding when the accident occurred.

The driver, according to reports, died on the spot while the two others, believed to be his friends, also sustained various degrees of injury.

The two passengers, who are in critical condition, are currently responding to treatment at the 37 Military Hospital.

Superintendent Yussif Tanko, the commander in-charge of the Mile 7 District Police, who visited the scene of the accident with a team of police personnel, told the paper that the accident occurred at about 4am yesterday.

The Toyota Corolla vehicle, with registration number GR 5089-16, was from Dome St John's area and heading towards Kwabenya.

Reports indicate that the deceased has not been identified.

The deceased reportedly lost control of the vehicle which somersaulted several times before landing into the ditch.

The injured persons were rushed to the 37 Military Hospital by some good Samaritans.

The eyewitnesses later called the police to convey body to the Police Hospital mortuary.

He said the mangled car was later towed to the Mile 7 Police Station to ease traffic in the area.