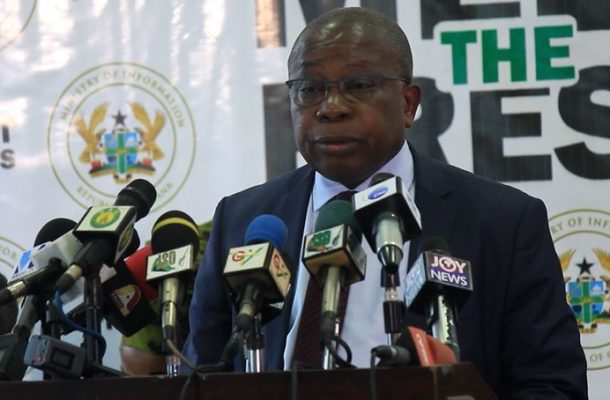 The Minister of Health, Kweku Agyemang Manu has cautioned patients from rushing to the Korle Bu teaching hospital with minor ailments.

According to Mr. Agyeman Manu, he is worried about the increasing pressure being put on the country’s first referral hospital adding that he does not understand why patients with minor ailments such as stomach upsets and headaches will visit the Korle Bu Teaching hospital as their first port of call.

“Don’t just get up and go to Korle Bu,” the minister told a section of the media in an interview.

Satellite facilities like the Mamobi Polyclinic, Adabraka Polyclinic, Kaneshie Polyclinic, 37 Military Hospital etc were put up to take up the pressure from Korle-Bu, he said, adding, Korle-Bu must only be for referral cases.

His comments come at a time when pictures are sprawling on social media about the congestion at the Korle Bu Teaching hospital.

Patients have been captured receiving treatment on the bare floor, on plastic chairs and benches at the Korle Bu Teaching hospital.

The bare floor treatment by the hospital appears to be a reaction to complaints by the general public to the no-bed syndrome that was said to be rife in many of the country’s hospitals.

Few weeks ago a 71-year-old man died after being turned away from some seven hospitals over lack of beds.

There were many reports and complaints from the general public, some of whom gave personal testimonies about how they were turned away from hospitals because of lack of beds.

The hospitals have responded to the complaints and are now admitting patients and treating them in every available space in the hospital.

Korle Bu has become the worst hit in this mass admission of patients which has resulted in congestion.

The Health Minister is worried by this new development.

“Korle Bu was set up initially as a strictly referral facility. When it comes to emergencies, we can’t send people away from Korle Bu. But by our conduct too now all of us want to go to Korle Bu without referrals,” he said.

There have been vehement criticisms against government for failing to open some new health facilities which could ease the pressure on the existing hospitals but the minister said some of the new hospitals require massive resource injection with its attendant cost implications which government will have to address.

He said there are some of the hospitals which were not part of his handing over notes and which are poorly resourced and need fixing before they can be opened.

“The new facilities we have just discovered. We are working very hard to try to operationalize them,” he said.