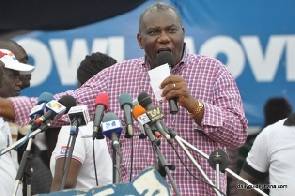 The opposition New Patriotic Party (NPP) has rejected President John Mahama’s claims that the Savannah Accelerated Development Authority (SADA), is already constructing dams and dugouts in the northern part of the country.

President John Mahama on Tuesday shot down the one-village one-dam campaign promise made by the NPP flagbearer Nana Akufo-Addo saying SADA was already doing it.

The NPP had said the project will help boost agriculture in those villages as well as ease access to water. “If he [Akufo-Addo] is talking about dugouts, SADA is doing dugouts for villages.

The problem we face now is not the dugouts its disilting them most of the dugouts are silted. And so SADA is having a programme to disilt the dugouts so that they can accumulate more water for the cattle and other animals to be able to get water,” Mahama noted.

But speaking on Eyewitness News, Boakye Agyarko, policy adviser to NPP’s Flagbearer said Mahama’s utterances clearly shows that government has failed the people of the north. “After eight years, we still hear the president talk about things that they want to do or things that they are supposed to be doing.

There is the need to tackle the acute developmental problems of the three northern regions with some urgency and some dispatch. The dams he is talking about and says that these are archaic solutions suggest to me that he admits there is a problem and if there is a problem under eight years of NDC rule he hasn’t been able to tackle those problems that is a clear indictment.”

ADVERTISEMENT
 
He maintained that the NPP “have found the solution and we will create a full scheme to implement those solutions to the relief of the people in the three regions of the north.”

One village one dam

Nana Akufo-Addo is on the campaign trail promising to provide the 216 districts factories each as well as villages in up north dams for irrigation.

He together with his running mate have promised to fix the Ghanaian economy if elected into power as well as give all the 275 constituencies in the country GHc1 million each.

1-this 1-that archaic – Mahama

Meanwhile, President John Dramani Mahama has pooh-poohed Akufo-Addo’s streak of promises ahead of the elections in December, saying those tactics to hoodwink voters are outmoded.