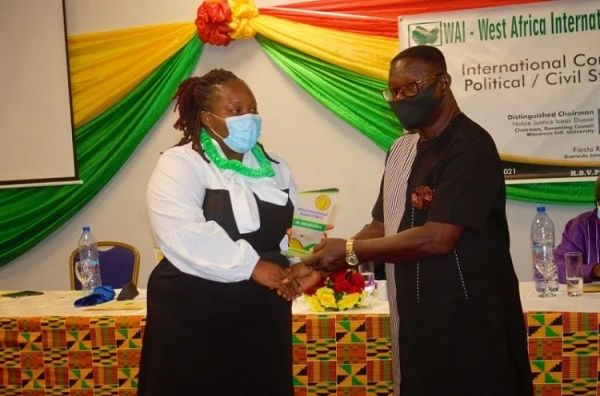 Dr Adu-Boateng who has on several occasions been awarded as one of the renowned medical doctors in Ghana received the award during the International Conference on Political/Civil Strife in Africa organized by the West Africa International Press (WAI).

The multiple award-winning doctor was awarded for his vast charitable works, exceptional dedication and professionalism exhibited in the healthcare sector, and his contribution to the growth and economic advancement of this country.

As part of his humanitarian works, Dr Adu-Boateng has constructed two 6- classroom modern facilities for the Eye of the Lord Orphanage and the Department of Early Childhood Education, University of Education – Winneba (UEW).

Receiving the award on behalf of Dr Adu-Boateng, Mrs Deborah Paintsil thanked the organizers and said Dr Adu-Boateng deserved every honour bestowed upon him.

According to her, Dr Adu-Boateng is humbled and motivated to do more in the healthcare sector and society as a whole.

His outfit, End Point Homeopathic Clinic, has been a provider of quality healthcare and unparalleled services; promoting and advancing the science of homoeopathy for the past ten years.

The clinic received several prestigious awards, including having been adjudged the Most Result-Oriented Homeopathic Clinic in West Africa and winning the Outstanding Homeopathy Hospital of the Year-2016 awards.