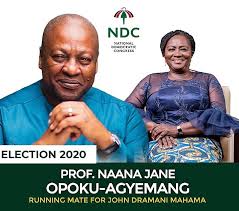 First of all, on behalf of my group, Friends of John Dramani Mahama (North America) I wish to congratulate Prof. Naana Jean Opoku-Agyemang for her selection as the next Vice President of Ghana. We know the selection of Prof. Jean Opoku-Agyeman came as a surprise to many political watchers, because most of them had thought that John Mahama was going to select either a male or an Economist or both. This is what has shown that John Mahama is a matured politician.

I personally think the selection of Prof. Jean Opoku-Agyeman is to take the office of the Vice President from comedians and place it where real business is done. In other words, John Mahama wants to bring sanctity to the office of the Vice President.
As soon as the Professor’s name came out as the incoming Vice President, the true colors of the NPP towards women was exposed. They are just talking nonsense. From the majority leader in parliament to the leader of their communications. From the party General Secretary to the party regional chairmen, everybody is talking nonsense. They are talking like their mothers are men. They are talking like they have not seen women before. You see, when you select a Vice Presidential candidate and the opposing party gets confused and start talking rubbish, you know you have disorganized their winning machinery and you have set yours in motion. This is why I say the victory of the NDC is coming again and let the people sing hallelujah.
I am sure the selection of Prof. Naana Opoku-Agyeman by John Mahama is to bring the campaign of the December elections to the people. John Mahama wants the 2020 campaign to be based solely on issues, and not who is a better Economist. John Mahama wants to separate the noise from the facts so Ghanaians will be well informed. A well informed voter casts the right vote. I think this is why the NPP are desperate to rig the elections.
Talking about rigging of elections, I want Team John and Jean to also focus on the IT Systems the party is providing. We are aware when in 2016, whiles the NPP was announcing the results, the NDC IT system had broken down. It took the Electoral Commissioner to announce that their IT system had been compromised before most Ghanaians got to know that all was not well for the country.
Never again should the IT Department fail Ghanaians. We still have about five months to elections, whatever support they need, they should ask for it. I believe they know what I am talking about.
Prophet Nigel has given two prophecies concerning the up coming elections. Long before John Mahama was elected as the Flagbearer, he had prophesied that a woman will be selected as the next Vice President of Ghana. That prophecy has been fulfilled. He also prophesied that John Mahama will win the December elections by 52.1%. We are waiting for that prophecy also to be fulfilled. Amen.
Dr. Lawrence is also the Founder of the Diaspora Progressive Movement (USA)