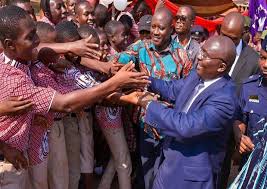 The concept of Old Students Association otherwise known as "old boyism" is one that has played an important role in the development of education. The contributions by old students are basically aimed at maintaining high moral standards of their alma-mater and to invest its development through provision of infrastructure and teaching materials through partnerships with management and government.

Tamale Senior High School (Tamasco) which turned 70 years this year has been at the forefront in nurturing and producing the future generation based on high moral standards. Since it's inception, Tamasco has produced several notable people who have served Ghana and the international community in various enviable positions. Most of these old students have through their individual efforts and by way of the Old Tamascans Association (OTA) have contributed significantly to the development of the school. Even though it will be impossible to list all these individuals and what they have done to give back to the Tamasco community, the contributions of H. E. Dr. Mahamudu Bawumia, Vice President of Ghana deserves special mention.

Dr. Bawumia who joined Tamasco in 1975 has played a unique role in uplifting the image of the school not only after becoming a great person in the society. As a student, he has in an excellent fashion contributed in making Tamasco maintain its enviable place as the "Northern Light". He was a core and lead member of the debate team that represented the school at National competitions. He was also a great sportsman and represented Tamasco at national table tennis competitions.

In terms of assisting the school's infrastructure, he has been someone who has offered the most significant support to the school in an individual capacity. At the school's 65th anniversary in 2016 when he was in opposition, Dr. Bawumia donated 65, 000 Ghana cedis.

Still in 2016 and as part of the 65th anniversary celebrations of the school, he in a spirited display of selflessness, single handedly donated an Ambulance for the school but as humble as he is chose to do it on behalf of his year group (1980 year group).

This quality of generosity and selflessness was repeated at the launch of the 70th anniversary celebrations of the school when after the school's board decided to name a new 600 bed house for students as "Bawumia House". The facility which was funded by the MTN foundation was made possible after Dr. Bawumia made a proposal to the foundation. In commenting on the development, Dr. Bawumia in his usual humble fashion said the honor was for the entire old students of Tamasco and not only Dr. Bawumia. He further donated a cash amount to support the celebrations and promised to see to it that 2 houses and the old kitchen will be rehabilitated following the request of the Headmaster.

These acts of selflessness and generosity by Dr. Bawumia are not only limited to his alma-mater. He has donated to several deprived schools. He donated desks to Kprerisi basic school when he was in opposition and ensured that a befitting school was built for the community after becoming Vice President. He has also donated to the Walewale high school among others and all these contributions help in the positive development of school children. They also serve as a motivation for old students of all schools in the country to strive hard to help their schools develop.

Tamale Senior High School (Tamasco) and Old Tamascans are proud of H. E. Dr. Mahamudu Bawumia and will continue to pray for him to occupy the number one position of the land.