Dr. Richard Tia of Knust writes: This country is sick 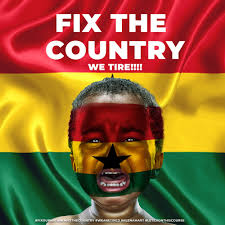 There is no doubt that this country needs urgent fixing, and anyone who doesn’t think so is obviously benefiting from lapses in the system. This country is sick, and unless something is done to salvage it, we might descend into a hole from which we cannot emerge.

Every country has problems but Ghana’s problems are almost self-inflicted and most of them defy logical explanation. It’s almost as if we have been bewitched never to do well.

1. Ghana’s unemployment rate is perhaps one of the worst in the world. Wages and salaries in Ghana are some of the worst in the world relative to the cost of living. And yet we are told that too much of our GDP is spent on public sector salaries and wages and that the only way out is to cut down the public sector wage bill! How do you do that without increasing the unemployment levels or reducing wages and salaries so badly that people’s monthly take-home cannot take them to even “Tech Junction”?

2. Long before Ghana discovered oil in commercial quantities, we had an oil refinery that refined crude oil into finished products. More than a decade into commercial production of crude oil, the only oil refinery we had is non-functioning and we have not found it necessary to get it to work and to build more refineries. I am not an economist but I think it is simple logic that building oil refineries to refine our crude oil makes more economic sense than putting all the crude into barrels and exporting it. If you build oil refineries you create jobs for your people – the chemists, the chemical engineers, the mechanical engineers, the accountants, the HR personnel, the drivers, the security personnel etc. The waakye seller will set up a canteen to sell waakye to these workers, and will have to buy beans and rice and gari from the local dealer. All of these people, who otherwise would have been jobless, will be gainfully employed and would benefit from the “oil wealth”. All these workers will pay their taxes which will make funds available for government projects. The fact that the crude oil is refined here means that you don’t have to spend dollars importing finished oil products from abroad, which in turn will lessen the pressure on the local currency and slow down the depreciation of our cedi.

We don’t do that. We have killed our only refinery and now export all our crude oil to other countries to be refined, creating jobs for their people, and then spend dollars to import finished products and when the price of fuel goes up and our cedi depreciates we appear helpless. Are we saying that we don’t know what five oil refineries will do for the economy of this country? Someone influential is benefiting from the wholesale export of our crude oil and import of finished products. #FixTheRefineries

3. Ghana has been a leading producer of cocoa for over half a century. What is the state of our cocoa processing company(ies)? Are we saying we don’t know what five cocoa processing companies will do for job creation in this country and how that will help maximize our benefits from the golden bean? #FixTheCocoaProcessingCompanies

4. Ghana has been mining gold in Obuasi probably long before Johannesburg. Compare Johannesburg the golden city of South Africa and Obuasi the golden ‘city’ (I was going to say golden village but someone might beat me) of Ghana. #FixTheMiningIndustry

5. When the population of Ghana was less than five million, we saw the need to build a hydroelectric dam to generate energy to power our industries and spur economic growth. The logic was simple: hydroelectricity was cheap, safe and environmentally friendly. Sixty years later we have almost moved to gas-fired turbines. Who develops that way? #FixTheEnergySector

6. Why is there so much corruption in this country? Put a Ghanaian in a place of responsibility and his first job is to look for an opportunity to take advantage of the system. Make a Ghanaian the chairman of the governing board of a public institution and he will make sure that every job vacancy is filled with his cronies and children of his cronies. Every recruitment exercise has "chairman's list" which is usually 9 out of every 10 slots available. Access to government scholarships is based on your proximity to someone in high places. Access to job opportunities is all based on whom you know and not on your own capabilities. We have become a country of “connections”, a country of “protocol”, a country of “come and see me”. How do you develop a country with that attitude? #FixTheCorruption.

7. Why does the average Ghanaian worker have such a terrible work ethic? “We arrive at work late and then spend the first hour in prayer, we become clock watchers and leave in the middle of critical work because it is the official closing time. Everything comes to a stop when it rains and we seem to expect the rest of the world also to stop. We have no respect for the hours set aside for work. We pray, we eat, we visit during working hours. We spend hours chatting on the telephone… we take a week off for every funeral and then we wonder why we are not competitive.” If you don’t want to work, who do you think should work to develop the economy for you? #FixTheWorkEthic

8. How do you expect a ‘journalist’ who lives on “soli” to adequately play the role of the fourth estate of the realm, fairly, fearlessly and professionally holding those in authority accountable for their actions? #FixThePoorJournalism

We need to fix this country and each of us has a role of play:

1. It is time politicians are made aware that they can’t come and make sweet promises for us to elect them to power and when they come and renege on their promises and we complain they say we are complaining too much. If you shout #4moreToDoMore and you come and you don’t do more, we will rise up and tell you to #FixTheCountry

2. It is important for our leaders to understand that putting money in people’s pockets means creating jobs for them and not sharing ten cedis ten cedis at campaign grounds, and the best way to do that is to create industries out of our resources.

3. It is time the citizenry understood that a corrupt and lazy people do not deserve development.

4. It is time for our pastors and Imams to teach their followers to be responsible citizens by eschewing laziness and corruption.