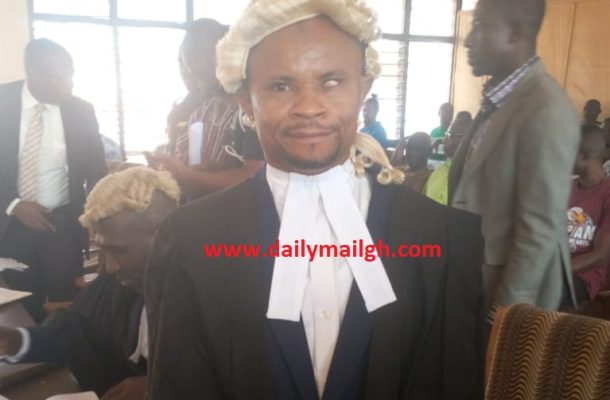 Drama unfolded Wednesday at a Circuit Court in Techiman after a judge caused the arrest of a man who pretended to be a qualified and experienced lawyer.

Iddrisu Yahaya, 34, was hired by four accused persons standing trial in a case of kidnapping — and posed as a genuine lawyer before the court presided over by His Worship Mr Alexander Graham.

His posture and his informal introduction of himself to the court, put the suspect in the top professional bracket at the packed court.

Dailymailgh also gathered that the suspect had collected the sum of GHc25,000.00 from the four accused persons who were involved in a case of robbery, kidnapping and murder being investigated by police in Techiman

Bono East Regional Police Spokesperson, ASP Mr Henry Ofori Addo who confirmed the incident to Dailymailgh.com said the suspect who is a resident in Tema has been detained as investigations continue.

“When he appeared before the judge, and he said he was standing in for the accused persons, he didn’t make formal introduction of himself because the judge thought that it was his first appearance in that court and as tradition demands you need to introduce yourself for the judge to be known,” ASP Ofori Addo.

Preliminary investigations also revealed that the judge on suspicion invited the suspect and a senior lawyer into his chambers where he quoted a wrong registration number and index number upon interrogation.

“During the interview he was not able to quote his registration and index number. The one he quoted was about 20 years back and so he was arrested and has since been detained,” the police spokesperson told Dailymailgh.com.

It is also gathered that the suspect may face court on charges of defrauding by false pretences and deceit of a public officer.