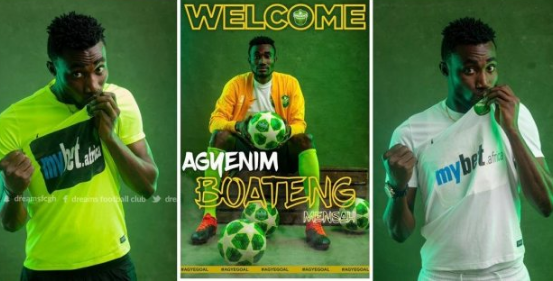 The striker signed a four year deal with the Dawu based side as they gear up for the 2020/2021 season which is set to begin in October.

His signing was announced by the club on their official website:

"Following a successful medical assessment, Dreams Football Club wishes to announce Agyenim Boateng Mensah as a player of the club after the ex Nzema Kotoko striker signed a 4 year deal with the club."


Confident Agyenim in his first interview said “I have a simple target, to score goals and to win the goal king at the end of the season. I was scoring goals in Divison One and I am here to continue that. I also want to help the club win trophies and put smiles on the faces of the fans.

"We are gradually putting the team in a good state by strengthening the squad with these signings.I want to assure the fans that management is doing everything possible to make the team ready for the start of the season." Administrative manager – Ameenu Shardow.

Mensah becomes the 5th player to join the Dreams FC during the “corona break” after the club concluded and announced the transfer of Abel Manomey,Joseph Esso,Philemon McCarthy, and Ali Huzaf.