Dumsor will soon vanish from our vocabulary — Terkper 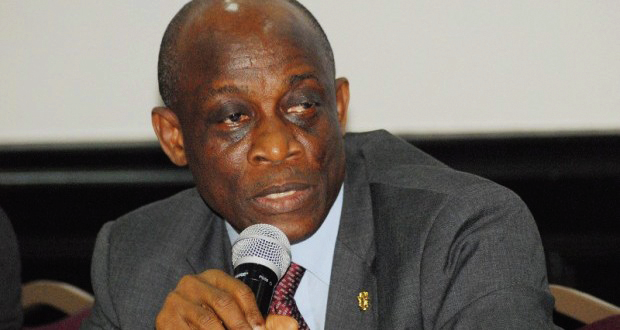 “Dumsor,” the term most people use to describe the erratic power supply that has hit the country in recent years, will soon vanish from the Ghanaian vocabulary, the acting Minister of Power, Mr Seth Terkper, has said.

He said the ministry and its agencies were spending sleepless nights to ensure that the disruption in power supply in the country was brought to normalcy.

“I, therefore, urge engineers and management of the sector to continue to explore whatever it takes to end the crisis even if it called for ‘performing magic’,’’ he said.

Mr Terkper, who is also the Minister of Finance, was speaking at a three-day Mid-Year Performance Review Conference for the Ministry of Power, its agencies and departments at Ada in the Greater Accra Region, recently.

The event was aimed at bringing the various agencies together to enable them to take a critical assessment of their targets and performance since the beginning of the year 2016, especially in the face of the current disruption in electricity supply.

The country has for the past few weeks experienced acute power supply due to a power deficit of more than 300 megawatts (MW). The situation was attributed to the cut in gas supply from Nigeria Gas (N-Gas) to the Tema enclave following debts owed by the VRA.

Also, gas supply from Ghana Gas to the Aboadze power enclave had also reduced considerably as a result of challenges confronting the Floating Production Storage and Offloading (FPSO) vessel, the FPSO Kwame Nkrumah.

The Akosombo Dam was also unable to generate power at full capacity due to the low level of water in the dam.

The situation has, however, improved steadily following the delivery of 950,000 barrels of crude oil from Nigeria to power the dual power plants in the Tema and Takoradi power enclaves.

The Aboadze power enclave in Takoradi in the Western Region took delivery of 400,000 barrels, while the Tema enclave took 550,000 barrels.

In order to sustain the improvement in the power sector, Mr Terkper called on all the key players in the sector to put in concerted efforts to further grow and improve the sector.

‘’The various Emergency Power Purchase Agreements and fast track projects to end the crisis are very essential and ought not to be in vain. This is, therefore, not the period for blame games but rather hard work and team work to yield positive results,’’ he stated.

According to him, the power sector held the prospect of growth for the country as electricity drove every aspect of the economy.

The sector, Mr Terkper said, therefore, deserved maximum attention and focus by all to ensure that the country had enough generation, transmission and distribution for an uninterrupted power supply.

The Deputy Minister of Power, Mr John Abdulai Jinapor, said the real challenge facing the power sector currently was the inadequate supply of Gas and diesel to run some of the power plants.

He was, however, optimistic that the recent importation of fuel would gradually bring the situation under control and further improve it.

For his part, the Chairman of the Energy Commission, Dr Kwame Ampofo, said the commission had embarked on major projects in the areas of solar power generation and distribution and other power renewable projects to augment the general efforts at energy sufficiency in the country.