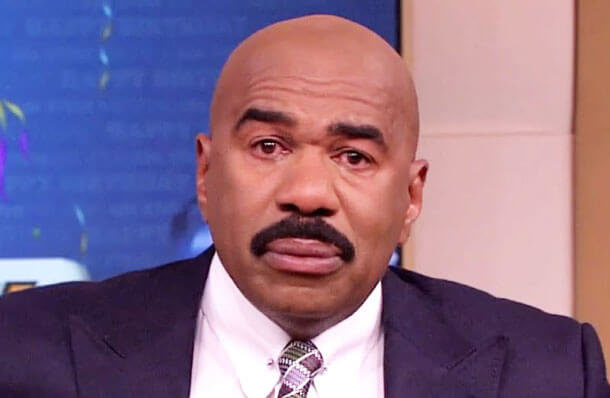 Often times, between tapings of his talk show, Steve will tell the crowd personal stories. On one such occasion, he decided to share with the audience something that had happened on Family Feud.

During the taping of an episode, the Steve recalled this contestant “sweating profusely” so much so that they actually had to change his shirt during the taping of the show. Steve tried to joke around with the guy, but could tell deep down, something was really wrong.

“He had played three days and they didn’t win the money, and he was just a wreck,” said Steve.

Finally, this man (who was also the captain of his team) won the $20,000, and he immediately collapsed to his knees, sobbing uncontrollably. Usually contestants celebrate after winning the big money but something was different.

“He just fell on his knees, and he wouldn’t stop crying,” Steve recalled.

Now even more curious about the man’s condition at this point, Steve made a remark on how emotional he was about winning the money.

That’s when the man looked him square in the eye and said, “Steve, I’m terminally ill. I’ve got three months to live, and because of my illness, I can’t get insurance. I need this money for my family.”

Taken back by the man’s determination and perseverance to win a game show in his dying days so his family would have something when he was gone, Steve decided to give him another $25,000 out of his own pocket.