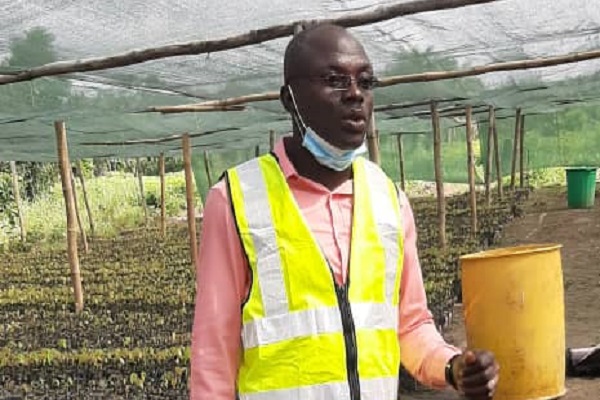 Chief of Akim-Achiase in the Eastern Region, Daasebre Gyenin Akenteng II, has appealed to the President oc the Republic, Nana Addo Dankwa Akufo-Addo, to consider the good works done by Richmond Amponsah, the District Chief Executive (DCE) of the area, and retain him in his second term.

According to the chief, their DCE performed extremely well in his first term and believes will do even much better for the area if he is maintained.

The chief addressing a presser said changing Richmond Amponsah will cause a delay in the progress of the area considering the services he has rendered to the District since his appointment.

"He has done nothing wrong and has served the people well since he assumed office. His sacking will bring a retrogression in our area. The President must give him another four years and if he is not able to perform then we change him but not now." Said Daasebre Gyenin Akenteng II.

The chief disclosed the DCE did not get things easier in his first term of office as according to him, the DCE used the largest part of the Assembly's fund in settling m outstanding debts.

Meanwhile, Richmond Amponsah, as gathered, has completed most of the abandoned projects under the National Democratic Congress (NDC) since he took the office.

He has connected electricity to about 95% (35) communities in the Achiase, and also made provision of mechanized and manual boreholes for the people.

Aside from that, he also lobbied for several CHIP compounds which have been built to help the people to get access to quality healthcare.

Under his watch as the DCE, the Assembly has also been able to provide seedlings to the majority of the farmers in the area.

He has also cut the sod for the construction of a hospital in the area.

His outfit helped the NPP in winning the parliamentary seat.

The Achiase NPP Constituency Chairman, Mr Isaac Amoah has expressed satisfaction with the performance of the DCE in the past four years and has also backing him to be reappointed.

According to him, Richmond Amponsah never undermined the work of the NPP and they will support him if the government maintains him as the DCE.

He affirmed that they will petition the government should they decline to maintain him as their DCE.