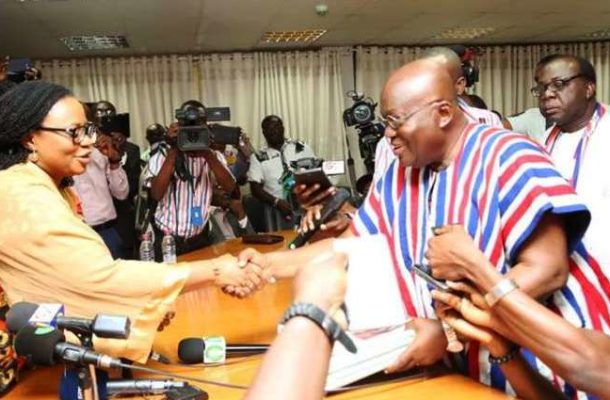 President Akufo-Addo has reiterated that he removed the chairperson of the Electoral Commission Charlotte Osei and her two deputies from office without any malice.

According to him, his actions were directed by the Chief Justice Committee that investigated the individuals following the allegations levelled against them.

“I acted and directed on the findings by the committee without any malice or premeditation. I am aware that the professional critics and those who cannot adjust to the will of Ghanaians in 2016 will continue to find a strain where there is none. I will continue to do my work to the best of my conscience and will continue to discharge my responsibilities,” the President told NPP delegates in Koforidua where the party has converged for its national executve elections.

Mrs. Osei and her two Deputies, Mr. Amadu Sulley and Mrs. Georgina Opoku Amankwah were fired over incompetence and misbehavior after a committee constituted by the Chief Justice found them culpable of allegations of procurement breaches among others.

The opposition National Democratic Congress (NDC) has served notice that it would embark on a nationwide demonstration against the decision arguing that it was “politically orchestrated.”

The President had earlier assured he would not pick a politically colored individual  to head the commission.