EC will be hugely embarrassed in court – Henry Lartey 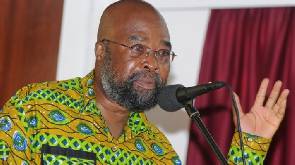 The Flag bearer of the Great Consolidated Popular Party (GCPP) Dr Henry Lartey has said the Electoral Commission (EC) will be humiliated when the party hauls it to court following his disqualification from the 2016 election.

According to him, the EC has up to Friday October 14, reinstate him as one of the Presidential candidates contesting the December 7 poll, or face him in court for being unjustifiably harsh on him.

The Chairperson of the EC, Charlotte Osei addressing the media at the close of filing nominations on Monday said, “The Commission is unable to accept Dr. Lartey’s nomination because the number of subscribers to his forms did not meet the requirements of Regulation 7 (2) (b) of CI 94. The details are as follows:

The Personal records of the Vice Presidential candidate have not been provided.

One subscriber – Amadu Babia Latifah. With Voter ID number 3357006984 & Polling station K100401 (page 110) also supported the nomination of another candidate. This disqualifies both candidates endorsed by the said voter.

Further, the said subscriber has different signatures on both candidates’ nominations raising questions as to the legitimacy of both signatures.

But speaking at a Press conference in Accra, Dr Henry Lartey stated that he’s saddened by the actions of the EC adding that he’s now come to the realization that all the problems the EC has had with some political parties especially the NPP is self inflicted.

“I’m so saddened that this is happening. At one point I thought the NPP was giving the EC so much problems, I now understand why Peter Mac Manu and John Boadu were giving them so much problems. I’m so saddened because I supported the EC all the time when the NPP was bashing them and now look at what they’ve done. There was a small problem though, to finish the whole form, in my anxiety to answer, I answered Mr Ameka’s (Running mate) form.”

“How long does it take to change that…not even one minute, it could have been done. Still they did not call us to change that, meanwhile they say they did not have his particulars…is that not his particulars there? The EC must be very careful because we want a credible elections and don’t give people the chance to use that to go to court again. I know that now they’ve seen their mistakes and they’re going to correct it. I have a very capable lawyer, if they don’t do it, we’ll take them to court and they will be very embarrassed, they will not know what to do with their selves.”