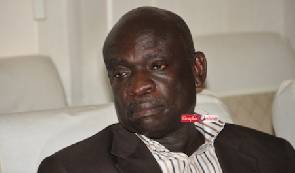 A pressure group calling itself ‘Save ECG Now’ is alleging that the Managing Director (MD) of the Electricity Company of Ghana (ECG), Mr. Robert Dwamena, is in bed with government over the sale of the ECG.

According to the group, even though Mr. Dwamena was due to exit office, government extended his tenure by one year, so he could finish with the sale/privatization/concession deal, which he (Mr. Dwamena) had already started.

“If that isn’t the issue, why has the government, through the Board of ECG, not let the MD go, since his retirement is due? Why won’t the government get a new MD and have some of the terms and conditions yet to be listed put in place as a contract?” they quizzed.

The group was of the view that a new MD may not agree to the move by the Government, hence the extension to enable the current MD to stay on for a year, saying “this was equally confirmed by the Deputy Power Minister, Mr. John Abdulai Jinapor, that the ECG Workers cannot call for the removal of the MD, whose tenure has been extended by one year.”

A statement signed by Boye Williams, Spokesperson for the group and Kwabena Tawiah, Director of Operations, said their findings revealed that, there were some Directors of ECG and the Northern Electricity Distribution Company (NEDCo) who had resigned and were leading the course of the sale.

The statement also mentioned that investigations conducted by the group indicated that Government debt owed ECG was in excess of US$500 Million, contrary to the low figure often quoted by Government assignees.

“Curiously, we found that the Government intends to pay this amount after the concession for a period of 5 years,” the statement noted.

It said that some challenges confronting ECG include managerial and governance inadequacies, impacting negatively on staff morale and discipline, adding that inadequate power generated which affects volumes of sales and turnover, as well as political interference and infiltrations in the administration of both ECG and NEDCo through the Self Help Electrification Project (SHEP) currently being executed by the Ministry of Power, were some but a few key challenges facing ECG.

Commenting on the impact of the deal, the statement added that, there would be complete loss of jobs for the over 6000 workers of both ECG and NEDCo.

This claim is grounded on the argument that government was able to negotiate for only the first 5 years for workers of ECG/NEDCo to be maintained, but beyond the 5 years workers with the power distributor would be on contract.

Boye Williams told journalists in Accra yesterday that, tariffs would be high for Ghanaians to pay, explaining that there would be no in built subsidies for Government to pay for Ghanaians and also, that the motive of a private investor, which is profit maximization, would be pursued by the investors.

“The private investor will not give due attention to rural electrification project which is a social intervention and has been executed by every government under the 4th Republic. This will be a thing of the past. Loss of National Assets to a private investor. These assets will be exclusively controlled and managed by a private investor,” the statement captured.

However, the group suggested that, the Government should address the leadership problem by the appointment of a Managing Director for both ECG and NEDCo on specific contract terms subjected to be renewed, based on performance.

It also said Government should provide the same conditions promised the private investor to create the enabling environment necessary for any company to operate efficiently.

“Government should stop the political infiltrations and interferences. Government should allow adequate time [about 2 or 3 years] to seriously try the Strategic Business Unit (SBU) concept that is being piloted in the Ashanti Region and proper appraisal done after the end of the pilot. Government should list or float the shares of ECG and NEDCo on the Ghana Stock Exchange (GSE).”

Meanwhile, the decision by Government to privatize ECG has met numerous backlashes, as workers of ECG recently embarked on a two-day strike against the decision.

However, it seems all protestations have fallen on death ears, as barring any unforeseen mishaps, ECG would be handed over to a concessionaire in January 2017.