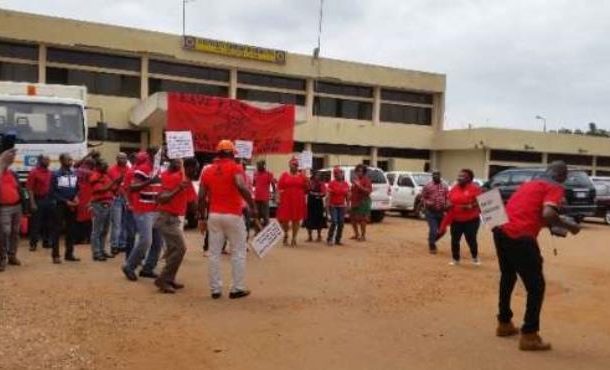 Staff of the Electricity Company of Ghana (ECG) in all the eight district offices in the Tema Region on Wednesday turned away clients who visited their offices as they embark on a three-hour demonstration against government's planned privatisation of the company.

Workers clad in red apparel, held placards and danced to songs provided by a cultural group.

Some of the placards read 'stop ECG concession', 'politicians stop dumping substandard meters on ECG', 'private sector participation! Where is Aqua Vitals Rand from South Africa? A lesson to be learnt Mr President'.

The Public Utility Workers Union (PUWU) on Tuesday declared a three-day demonstration nationwide to back their demands.

The move is to buttress their resolve to resist the privatisation and also to force the government to review the Millennium Challenge Corporation Compact which seeks to cede the ECG to private investor for a period of 25 years.

Mr Frank Adjetey Badu, General Secretary for the Junior Staff Union of ECG told the Ghana News Agency that workers would not change their decision on the planned concession.

Mr Badu said workers were not fighting for their own interest but rather to save the entire country saying " if monopoly under government was not yielding the necessary result, how much more under a private monopoly?"

He said their actions would yield the needed results adding that should government refuse to heed to their warnings, they would take another action.

He stated that the demonstration would continue for three days unless they hear some favourable news from government.